General of the Knights of Renais

Prologue Chapter: The Fall of Renais

Christopher Corey Smith
[view]
“The nobility should not favor one subject over another. How can they maintain their fealty if you treat one so differently?”
—Seth, to Eirika

Seth is a playable character from Fire Emblem: The Sacred Stones. He is a brave and clever knight of Renais and serves as protector and advisor to Eirika and Ephraim. He is better known as the Silver Knight.

Seth is General of the Knights of Renais, the elite cavalry force of the Kingdom. Following the brutal invasion by the overwhelming forces of the Grado Empire, he follows king Fado's orders, fleeing from the country in order to protect his daughter, Princess Eirika, by conducting her to safety at the Kingdom of Frelia. Though, during the escape he meets the general Valter, from the enemy empire. During their fight Seth manages to escape with Eirika and the other knights that followed him, but he was gravely wounded. He survives, but such wounds never heal completly, and it will afflict him during the entire story. Even so, he is able to ignore the injures to keep fulfilling his duty.

When they reach Serafew, Seth and Eirika meet the fugitive bishop Natasha, who is seeking their aid. Natasha trusts Seth by telling them the secret plan of the Grado Empire, that desired to detroy the Sacred Stones. Seth is also the first one to discover Orson's treason, noting his odd behavior.

As the journey progress, Seth will either follow Eirika or Ephraim in their journeys as the twins decide to take different paths. If the player decides to follow Ephraim, Seth approaches the prince, informing him that Eirika has ordered the entourage, that accompanied her up to this point, to escort Ephraim into his journey to Grado. If the player decides to follow Eirika, he continues following her in the journey, until both armies are all reunited again in chapter 15.

He is also the man who Fado entrusted the secret of the bracelets to. When the time is right, he eventually reveals the secret of the the lunar and solar braces to Ephraim and Eirika, both who were ignorant of the importance of the stones in the jewels they were wearing. When the bracelet is stolen by Colm, Eirika doesn't pay any mind for missing a jewel, but she is pressured by Seth to pursue the thief, even though at that instance he only hints the importance of the item. Later, Seth is the one who instructs the twins how to use the items, that unseals a secret chamber where they can promote, and obtain the sacred weapons.

Seth returned to Renais with his new king Ephraim and dedicated his life to protect the royal family. If Seth has an A rank with Natasha, he will happily marry her and have a life of peace while they both dedicate on reconstructing Renais. If he has an A rank with Eirika, he will marry her instead, with the blessings of Ephraim.

Seth is an exemplar knight, best described as a 'duty comes first' man. He is stoic, and deeply loyal to his kingdom Renais. He has a polite, calm demeanor and is usually expressionless. He puts his emotions aside to focus completly in his job, always letting his duties come before his feelings, as seen in his conversation with Eirika, where he has difficulties expressing his feelings to people that have a higher social status, showing a great deal of humility and honor. Though, he sometimes loosens up when talking to others, such as Franz and Natasha.

He is a very dedicated knight; the fact that he faces the fierce General Valter and continued to follow his king's orders despite being wounded, shows how skilled and devoted he was to his country. He is also very perceptive, with strong tactical skills. Seth is also concerned with the situations of others and watches over the welfare of everyone in the army.

* 85% for the Japanese version

Seth is arguably among the strongest units in the entire series. His starting stats are noteworthy for being on par with those of a legitimately promoted cavalier, with the fairly competent Franz only matching him around level 15/1. Shockingly, despite his outstanding start, Seth possesses solid growths across the board, a grand total of 325%, with Luck as his only 'weakness'. Seth typically has lower HP and higher resistance to all of the other cavaliers, with his other stats averaging between those of Kyle and Forde.

Seth starts with an A rank in both swords and lances, allowing him early command of the weapon triangle, and his high 8 move allows him to charge into enemy lines and put his good stats to use. Seth also possesses the Anima affinity which, thanks to the enemy's generally abysmal evasion rates, is at its strongest in this title. He easily fosters Support with Eirika, and can also support Franz relatively easily.

All in all, Seth is among one of the more consistent units in the game. He starts out strong and can hold his own up to the end of the game. While other Cavaliers, particularly Franz, will eventually be able to match or even surpass him, this only materializes later in the game, if at all. Seth lacks the critical flaw (low long-term potential) that holds most early-game pre-promotes in check, and the enemies, even very late in the game, simply are not strong enough to catch up to him, so he will be able to consistently stay ahead of them for the duration of the campaign. He can practically solo the game - in fact, doing so is widely considered easier than using other units besides him.

Seth, the Silver Knight (真銀の聖騎士 Ma gin no Seikishi)
"Seth returned to Renais with Ephraim and his fellow knights. His dedicated service made him the most trusted of the new king and queen's guardsmen, as well as the most famous of knights in all of Renais."

A Support with Eirika
"Upon their return to Renais, Eirika and Seth were wed, with the blessings of Ephraim and all of the Knights of Renais. The tale of the love that grew between a princess and her loyal knight became a beloved romance in Renais."

A Support with Natasha
"Natasha returned to Renais with Seth, where the two were wed. The reconstruction of Renais kept them busy, but when all the work was done, they settled down to live their days in peace and happiness."

“Urgh... My apologies. I must withdraw.”
—Defeat Quote in The Sacred Stones.

“My only wish is to serve and protect the two of you...”
—Final Chapter Quote in The Sacred Stones

Seth is illustrated in the trading card game Fire Emblem Cipher with the following cards: 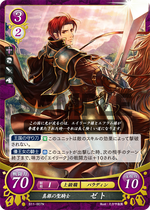 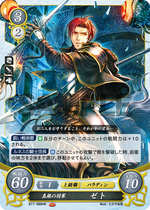 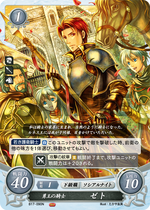 'Seth' is a Hebrew name meaning 'placed, appointed'. In the Bible, he was the younger brother of Cain and Abel, and the forefather of the entire human race. Also, 'Seth' could refer to the Egyptian god of the desert, evil and chaos more commonly spelled 'Set'.