∞
[view]
Setsuna's Yumi (セツナの緩弓 Setsuna no kankyū, lit. Setsuna's Slow Yumi) is a Yumi that is introduced in Fire Emblem Fates. Eponymously named after Setsuna, Setsuna's Yumi, like its Japanese name suggests, reflects the character's slowness to react to situations and forces them onto the enemy, reducing its target's Skill, Defense and Resistance by 4.

On a successful hit, the Yumi conveys these reductions to the enemy in a similar way to Shuriken. This allows bow users to inflict status reductions on the enemy, if they do not have or are not willing to use shurikens/daggers to debuff an enemy target beforehand. Shurikens are often still better in terms of debuffing an enemy target due to either having better/more diverse stat reduction and have a far superior hit rate. 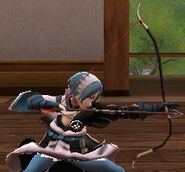