Kate Higgins
[view]
“If you ever face those louts, put me in your ranks and I'll teach them.”
—Shade

Shade is an original character from the trading card game Fire Emblem 0 (Cipher), known as the Teacher of Black Shadows. She is an experienced dark mage from the Kingdom of Nohr, and the rival of her Hoshido counterpart Emma.

In series 6, Storm of the Knight's Shadows, Shade joins with Xander's Nohrian army.

Shade makes her video game debut as a DLC character in Fire Emblem Echoes: Shadows of Valentia, where she and Yuzu join either army depending on which one saves them both.

A woman who is adept with magic and possesses great wisdom and knowledge, Shade is shown to be knowledgeable and calm (unless someone were to inadvertently poke fun at her), akin to a mature older sister, as she teaches various things to her puzzled colleagues like Emma. Although she generally behaves in a very mature fashion, she tends to react poorly to unforeseen circumstances, especially when it happens to people she knows, causing her to go into a talkative panic of frustration and concern.

Shade is easily one of the best healers in Echoes, thanks to her good bases and decent growth rates. She is faster then all the other clerics, her spell list is on par with Faye (except for Anew) and she tanks out the most of the clerics, but it mostly depends on when the player intend to recruit her. She makes a good healer as she knows Physic from the start, but she can't use Recover, meaning a slight higher cost of HP, but that shouldn't be a problem considering her high HP. Shade also has Silence, which will be very useful in Chapter 4, where a lot of enemies, regardless of the path she's recruited in, are mages.

However, Shade is definitely less offensive than the other Saints when she joins, in fact her role will be more supportive than anything. Despite being a Saint, Shade starts only with Nosferatu as an offensive spell, while all the others of the same class will have Seraphim, which will practically be vital late in the game. While she can learn Seraphim, she only do so at level 7. That will be hard considering the relatively low experience White Magic gives when used and that she'll have to gain four levels.

Granted, Shade will be a very good healer and support, but if someone actually manages to make her learn all of her spell list, she will be an exceptional unit in both offensive and supportive roles.

After the war, Shade departed Valentia for a new land. History makes no further mention of her, but some say she went on to master a plethora of magic and staves, bequeathing this wealth of knowledge to a new generation through strict—yet kind—teaching.

Shade appears in the following cards: 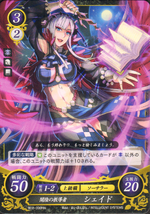 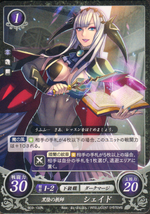 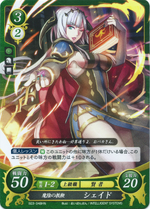 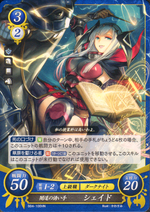 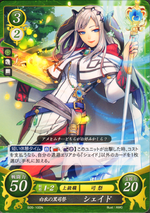 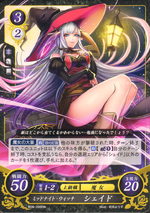 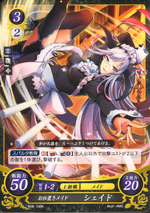 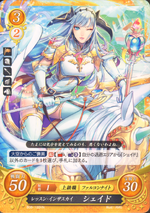 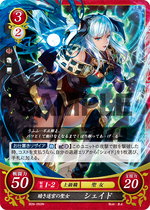 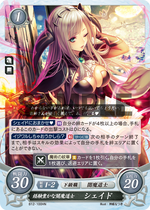 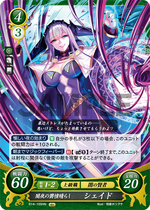 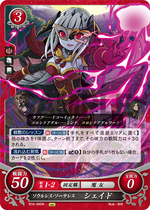 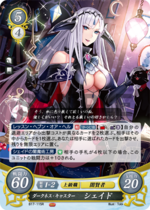 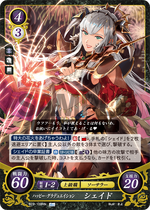 As one of the first two Cipher characters, Shade is unfortunately not as powerful as one may expect. Not one of her cards has a printed Attack Value over 50, leaving her quite underpowered compared to the large majority of Cipher's many characters.

Unlike her fellow veteran Cipher character Emma, Shade does not have the Flier Unit's 30 Support Value, instead bringing a Tome-user's 20 Support Value and the Dark Mage Support Emblem to the table, which while better than say your average red-and-green Cavalier/Paladin tag team duo's 10 SV is still not really enough to make her viable.

Shade only has one Cost 1 card, with only one Skill, a +10 ATK buff that only activates while your opponent has four or fewer cards in their hand. Her Series 2 HN is probably the closest to viable Shade gets, giving her an extra 10 ATK when she is Supported by a non-Black Unit, meaning she can hit 100 if she flips an Archer Support on attack, which is good, but she usually ends up falling short on the defense with only a 50 Attack Value. Cards from Series 7 like Eliwood, Hector, and Lyn give her a slightly better opportunity to be decent, but she still remains somewhat behind even her fellow Cipher-exclusives. Her Series 3 HN gives herself and one ally 10 ATK…as long as they are the only two cards you control. This is not too hard to do with some decks that may only focus on having two characters out at a time, but her attack only hits 60 with this buff, leaving her still only hitting 100 max if you can flip an Archer on the attack. Her Series 4 HN gains 10 ATK if your opponent has exactly 4 cards in their hand, a ridiculously situational buff that once again only brings her to 60 Attack and then only until your opponent draws to start their next turn or Deploys a Unit to bring their hand to more or less than 4. She can also move herself cost-free if she is Untapped, making it difficult to get her back out of the danger zone without a Rescue Unit. Her Series 5 N card can use a Heal as soon as she is Deployed, making her one of the few cards that can use Skills in the Deployment Phase, but she only gets the one Heal - you need to find some way to return her to the hand and re-Deploy her to use it again. Her two Series 6 cards brought her almost to useful, with her Maid N card allows you to destroy a Cost 2 or lower enemy Unit besides the main Character, which is not too bad for when your opponent is using a deck with lots of strong Cost 2- Units, and her Witch HN card gets a 1 Bond no Tap required Heal at the end of one of your turns where one of your ally Units was destroyed, which is decent only because the majority of the Series 6 Black cards have effects that destroy themselves. With Series 8 out, Shade finally has a decent chance at being a usable Main Character, as her S8 3/2 allows you to Heal a Shade whenever she beats an enemy in battle, making her the only Unit that can Heal another copy of themselves.

In the end, Shade, despite having a fairly wide variety of Skills, still fails at making up for her abysmal Attack, meaning it can be rather hard to make her a Main Character in an viable manner.