The Shadow Sword is a Sword that debuted in Fire Emblem Gaiden.

In Gaiden, the Shadow Sword is very similar to the Devil Sword found in Fire Emblem: Shadow Dragon and the Blade of Light, having a random chance to damage its wielder instead of their target whenever they land a blow. Fire Emblem Echoes: Shadows of Valentia adds the Lifetaker skill to the Shadow Sword as a counterweight to this risky backfire effect.

In Thracia 776, the Shadow Sword is passed into Mareeta's hands by Raydrik, where the corrupted sword essentially takes control of her mind, compelling her to attack anyone at sight, be they friend or foe. The curse is later purged by Saias, whereupon the now-neutralized blade is returned to Mareeta, functioning as a unique weapon that is bound exclusively to her. 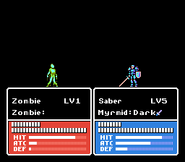