Marisha Ray
[view]
“Yeah. I'm on a pegasus, see? I have a different movement pace than the others, so it's easier to fight on my own...”
—Shanna talking to Dieck in a support conversation.

Shanna is a playable character from Fire Emblem: The Binding Blade. She is a Pegasus Knight from Ilia and the younger sister of Juno and Thea.

She makes a brief cameo appearance in chapters 16 and 17 of the Hasha no Tsurugi manga.

An apprentice Pegasus Knight of Ilia, Shanna join Dieck's mercenaries to follow the Knights’ code that “one cannot truly learn without learning from foreign mercenary groups”. After the war, her deeds were fully recognized and she became an official Pegasus Knight.

The youngest of three sisters and with a cheerful free spirit, Shanna is the type to talk to anybody without hesitation, even though she is aware that in order to become a Pegasus Knight, she will have to face countless harsh battles, and experience being a friend or foe to her own sisters.

Despite that, with her personality, she is still welcomed as a member by Dieck, whom she cares deeply for and even used to address him as "Chief", though he wasn't fond of the nickname. She often seem to be incredibly nice towards her mercenary comrades as well, thinking that Lot has a crush on her, although he only cares about her as a little sister. Because of this, she calls him "Big Brother". She is also kinder to Lot than she is to Wade because she fights with the latter in their supports conversations.

Shanna is the player's first flying unit and thus is very useful for rescuing others and carrying them around the map. She has very high Skill, Speed, and Luck, but her HP, Defense, and Strength are quite lacking, although her competition in units who join around the same time, such as Lance, isn’t much better by a much bigger margin. Even still, this isn’t much of a problem for Shanna, even on Hard Mode. With her base strength of four, she’s able to 2RKO most soldiers and archers with an Iron Lance. And with her high speed she can still double enemies using a Silver Lance even though her speed will be lowered by 6 or 5 (4 or 3 if she is given a Body Ring) Which can do a lot of damage especially in a game where it's rare to 1RKO enemies.

Her constitution is on the low side, but this means she can pick up heavy units with a huge con with ease, such as Dieck, with his relatively high constitution of 13. Even with this constitution, she’s able to double the same things as units such as Lot or Alen, who have similar speed to her wielding an Iron Lance; in fact, at base she even matches Lance's base speed if she is using an Iron Lance. With her speed growth, she’ll be able to reach higher speeds on average, normally able to double Hard Mode Cavaliers by Chapter Six, contributing a lot as a combat unit. Her Pegasus helps her reach awkward spots within maps to reach things other units most likely couldn’t, making it easier for her to chip enemies, and sometimes even kill them.

Shanna also has one other thing she has no competition for; an Elysian Whip. This is found just before the Western Isles within Chapter 8’s treasure room. If Shanna is at least level 10 by this time, the choice can be made to promote her early, giving her access to swords just in time for an area filled with axe users. She also gains a stat boost upon promotion, which help her tremendously in the long run.

By the time Thea joins, Shanna will most likely better than, or on par with her, despite the Hard Mode bonuses. Shanna also has the advantages of being recruited at Chapter 2, as opposed to her joining at Chapter 10B/11A, depending on the route taken. It’s a great idea to use both, since having two fliers is useful for rescue chains and they can both support each other. Shanna supporting with Roy is also feasible if she is near him often, normally rescuing him onto a more convenient spot. This support could give both parties a much needed boost in attack and critical, with Shanna's rescue utility aiding Roy in approaching the throne despite their differing movement when separated. Supporting with Dieck gives her a nice boost in Defense and critical. Wade can give Shanna the same bonuses of the Roy pairing, so if he's in use this is a good pairing to boost both sides' effectiveness.

Overall, Shanna is a very effective unit in almost every regard. She’s a great utility, good combat unit. It is recommended to use her for almost any chapter within the game, as she makes it a lot easier.

Sprightly Flier
A trainee of the Pegasus Knights of Ilia. Cheerful and optimistic. Appears in Fire Emblem: The Binding Blade.

Bridal Novice
A pegasus-knight trainee from Ilia. Cheerfully participating in the bridal festival. Appears in Fire Emblem: The Binding Blade.

Shanna - Cheerful Knight (朗らかな天馬騎士 Hogarakana Tenba Kishi)
"After the war, Shanna was knighted and became a full-fledged Pegasus Knight. Throughout her career, she served as lieutenant and squad leader, and she eventually rose to the position of Flightleader of Ilia. Her cheerful personality earned her much admiration and respect from her colleagues."

Shanna and Roy
"Shanna gave up the path of the Pegasus Knight and went to Pherae with Roy, where they married. Rebuilding the battered land was a painful process, but her cheerful personality encouraged many people to rise up and help lead Lycia to prosperity again."

Shanna is illustrated in the trading card game Fire Emblem Cipher with the following cards: 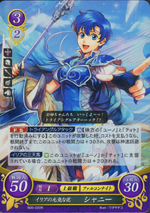 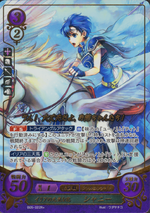 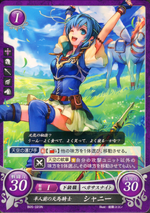 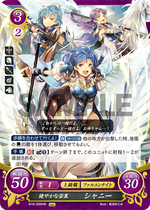 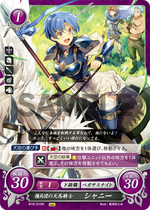 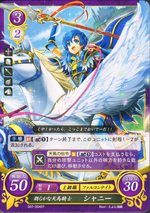 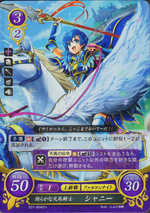 Shani is Hebrew for "red". [1]. Shanna (often written 'Shana' or 'Shayna') is a Hebrew or Yiddish name meaning "beautiful".