Chapter 16B: The Dark Forest

Swordmaster
[view]
“The most vital element of Astra is your heart. You must let your heart flow through your technique! (Ugh, how am I spouting such drivel…?)”
—Shannam "teaching" Mareeta the Astra skill

Shannam is a playable character from Fire Emblem: Thracia 776. A sword-wielding mercenary from Silesse, he parades around impersonating Prince Shannan of Isaach.

Shannam first appears in Chapter 14, where, upon learning that Tahra has come under attack by the Grannvale Empire, he hastily packs up his belongings and leaves. Homer, a bard whom he had befriended during his stay in the city, reveals his awareness that Shannam is not the prince of Isaach like the Tahran citizens had been led to believe.

Shannam later lends his blade to Loptous, and is encountered by Leif's army when they are deliberating which path to take in Chapter 15. Mareeta can speak to him in this chapter, where he tricks her into believing he is Prince Shannan. Shannam's lie almost falls apart when she eagerly implores him to teach her Astra, but he manages to save himself through the tips that he gives her. Although his advice for Mareeta to merge her blade and her heart as one comes from a place of desperation, it miraculously turns out to be exactly what she needs to learn the skill.

When passing through Melfiye Forest in Chapter 16B, Homer can speak to Shannam, and although the bard initially attempts to brush him off, he eventually convinces him to join Leif's army.

Shannam then goes on to continue supporting Leif in his cause to liberate Northern Thracia from the Grannvale Empire. He returns to Isaach thereafter, where he ceases to be a mercenary, settling for a life of normalcy instead.

Despite playing pretend to be Prince Shannan, Shannam lacks all the qualities that the prince is known for. Key among these is courage: When Tahra comes under attack in Chapter 14, Shannam does not stay to help in its defense despite having boasted that he is the true prince, instead choosing to flee to save his skin.

On this note, while Shanam makes for a terrible combatant, he is skilled as a trickster, as shown through his success in convincing the Tahran citizens that he is Prince Shannan. This can be also be seen in-game in Chapter 15, where he manages to dupe Mareeta into believing that he is Shannan.

Shannam is a Swordmaster with 0 FCM, a relatively low weapon rank and very bad combat bases - a good reflection of his incompetence as someone pretending to be an esteemed warrior. His 50% Strength and Speed growths may seem impressive, but they are not nearly enough to offset his horrible bases, late join time, and poor bulk. No unit in Thracia is truly unsalvagable, but Shannam certainly comes the closest; even scroll abuse can only do so much, and even if he somehow manages to cap Speed and Strength (which is unlikely), his lack of offensive skills besides the incredibly common Continue and his nonexistent FCM will make him mediocre at best.

Shannam's main contribution is being the only unit in Thracia 776 with Bargain, allowing him to buy things at half price. Unfortunately, there are not many shops selling useful items left beyond the point where he joins, and you would have likely amassed enough gold at this point to make his contribution unnecessary. There is a Secret Shop, but the Member Card is very difficult to obtain, making Shannam even less relevant on the majority of playthroughs.

"Of no use to the New Kingdom of Thracia, Shanam returned to his native Isaach. He quickly discovered that he was ill-suited to the life of a sellsword, and gave it up in favor of leading an honest life."

Shannam is illustrated in the trading card game with the following cards: 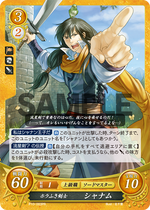 Artwork of Shanam in Fire Emblem 0 (Cipher) by Senri Kita.

Shannam as he appears in TCG.

Shannam as a Swordmaster in Fire Emblem 0 (Cipher).