Ted Sroka
[view]
“When I was young, I was asked by your father Sir Sigurd to take care of Lady Deirdre. But I failed, and she was lost. It was all my fault. And I couldn’t forget what happened then to this day…”
—Shannan to Seliph.

Shannan is a playable character from Fire Emblem: Genealogy of the Holy War. He is the son of Mariccle and the prince of Isaach in the second generation. He is also the nephew of Ayra, the grandson of Mananan, and the cousin of Larcei and Scáthach. As he is a direct descendant of Od, he is capable of wielding the Balmung.

In Chapter 1, Shannan is initially held captive by Cimbaeth, who uses him as a hostage to force Ayra into doing his bidding. When Sigurd captures the castle and saves Shannan, Ayra will join his army, albeit begrudgingly. In Chapter 3, he makes the grave mistake of allowing Deirdre to leave Agusty Castle alone, indirectly leading to her eventual capture and brainwashing by Manfroy. He is known to shoulder the responsibility of Deirdre's disappearance, despite Sigurd assuring him that he is not to blame.

After Sigurd defeats Lombard, Shannan departs with baby Seliph and his best friend Oifey to the outskirts of Isaach. He remains there for the next couple of years, raising his young cousins, the twins Larcei and Scáthach, on Ayra's behalf. He will raise Creidne and Dalvin instead if Ayra bore no children.

Later, Shannan returns as a Swordmaster unit who automatically joins on the first turn of Chapter 7. He will recruit Patty/Daisy when she attempts to pilfer the Balmung sacred sword from the Aed Shrine in a significant event of the game, whereby he manages to convince her into passing the sword into his possession.

After Belhalla is captured, Shannan expresses remorse at having been the cause of Deirdre's disappearance, but Seliph, much like his father, re-assures him that he is not at fault. Shannan will ascend the Isaachian throne at the end of the game, provided that he survives until then.

Shannan joins you in Chapter 7 as a Pre-Promoted Swordmaster, starting with excellent base stats in Strength, Skill, and Speed, which are good enough to one round most enemies in the Final Chapter using his trusted Balmung (which he gets from Patty in their join chapter), a light Weight Holy Weapon that only Shannan may wield that gives him +20 Speed and +10 Skill, the same bonuses as Forseti. Combined with his Pursuit, Adept, and Astra skills, Shannan has practically peerless offensive potential among second generation units. This is especially true if you rack up 50+ kills on Balmung, as it will give Shannan the ability to Critical with a 40%+ chance due to his likely capped Skill plus Balmung Skill bonus.

Despite Shannan's amazing combat performance, he does have some minor flaws. While he will have excellent Evasion right from the start due to his high starting Speed and Balmung Speed bonus, his durability will take some leveling to become respectable. He initially will not be very good at actually absorbing hits, particularly from Mage-type units. But his very high HP growth will eventually remedy this. While only a very minor downside, Shannan is pretty unlikely to cap his Strength or Speed, and on average will wind up about 3-4 points short in both (one can ameliorate this by pairing him with Larcei or Patty, respectively). Shannan's only real substantial weakness is his low Movement. Maps in Genealogy of the Holy War are very large, and Shannan will have trouble keeping up with all of your mounted units unless you give him a Leg Ring.

That being said, Shannan is a proficient Boss killer and his actual combat performance is top notch.

In Chapter 7, if Shannan speaks to Patty/Daisy, he will obtain the Balmung.

In Chapter 7, if Seliph speaks to Shannan, Seliph will gain one point of skill.

In Chapter 7, if Larcei/Creidne speaks to Shannan, she will gain two points of strength and 100 love points with him.

In Chapter 10, if Shannan speaks to Seliph, Shannan will gain three points of HP.

In the Final Chapter, after Dozel Castle is captured, if Larcei/Creidne is in love with Shannan, she may speak to him, and he will gain three points of strength.

Wielder of Astra
Prince of Isaach and descendant of the crusader Od. Skilled wielder of the divine blade Balmung. Appears in Fire Emblem: Genealogy of the Holy War.

“Geh... Forgive me, Seliph...!”
—Shannan's death quote in the Second Generation of Genealogy of the Holy War

"The Kingdom of Isaach was quickly liberated from the Empire’s despotic reign, but during the successor to the throne’s absence, the people lived days of anxiety. And so, with the victory of the Liberation War and Shannan’s return to the country, the people of Isaach rejoiced. Succeeding to the throne, Shannan, Together with, among others, His sweetheart, [Lover], [...] Devoted himself to the reconstruction of the country, and aimed at the construction of a wealthy country by improving cultural exchanges with the other countries. Isaach was once called the Soil of the Eastern Barbarians, however, under the reign of King Shannan, it will have an unprecedented development, and before long, will give birth to one large, and powerful country that is not inferior to the other countries, if not surpassing them."

In the Mitsuki Oosawa manga adaptation, Shannan attempts to attack Manfroy in the scene where Deirdre is taken hostage. He ultimately fails to do so, as Manfroy casts a hex to paralyze him before warping Deirdre away.

Shannan is illustrated in the trading card game with the following cards: 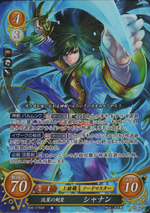 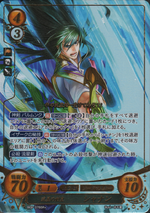 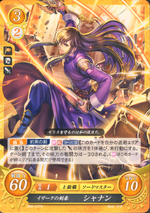 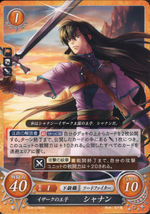 Shannon is a unisex name which takes its origins from Celtic and Irish mythology. It literally means "small, wise one".