Sharena (シャロン, Sharon in the Japanese version) is a main character and a protagonist in Fire Emblem Heroes. She is a princess of the Askr Kingdom and the younger sister of Prince Alfonse.

Sharena is cheerful and loves making friends, especially with heroes and legends.

Sharena boasts very high attack and moderate speed, but is very fragile due to low Defense and Resistance Stats. She is the only one of the Heroes trio that does not come with an innate Attack Skill, but can Skill Inherit one. She comes with Rally Attack to boost the Strength of an ally and also has Fortify Def to boost the defense of an adjacent ally, making her very useful for support. Like Alfonse and Anna, there are no ways to secure multiple copies of her, making her viability a little less than most of the Orb Heroes in the long run. Nevertheless, Sharena is considered to be a very useful unit in Arena battles as Red units, especially Sword units, are very common. 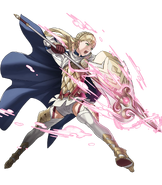 Sharena is damaged in the battle. 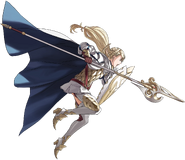 Sharena, in the title screen of Fire Emblem Heroes.

A drawing of Sharena by Yusuke Kozaki. 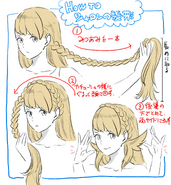 Sketch of Sharena doing her hair by Yusuke Kozaki.

Drawing of Sharena by Yusuke Kozaki, done on an iPad.

Sharena with Feh the owl. 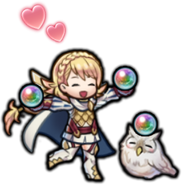