Lauren Landa
[view]
“Really...? It's already the end. Samson, I have brought you much trouble. I need to watch the final days of my kingdom of Gra. You may leave now.”
—Sheena to Samson

According to the Takayashiki Hideo's Mystery of the Emblem novel adaptation, Sheena is 24 years old.

Sheena is the daughter of King Jiol of Gra through his second wife, but unlike her father, she has a sense of honor. Because of this, she disliked her father for siding with Dolhr and betraying Altea and thus she fled to Pales.

After her father's death, Emperor Hardin of Archanea instated her back to Gra, where she gained the support of her people. When war began again, she hired the hero Samson as her protector and they grew attached with one another. Unlike her father, she cares for her subordinates. When she noticed that Marth was not harming her fleeing soldiers, she joined Marth's army and convinced Samson to do the same.

When the war ended, Sheena gave up her position and settled in Pales. It is implied she did it to stay with Samson.

Sheena is considered one of the weakest units in Mystery, due to her very low base stats for her join time and her low Movement. Though she does boast above-average growth rates that can drag her from her doldrums, especially as the player has Starsphere access at this point and the enemies on her join chapter are easy to kill with her, most of the army should be capped out or coming close to it, making her purpose questionable at best. Her only particular point statwise is high Defense, which is largely irrelevant when much of the lategame is consumed by magic units or Defense-ignoring dragons. She does have one interesting niche, however: she is one of the player's only options to use the Gradivus indoors, with the only other being Draug. This is less useful than it may sound, given that many of her opponents are likely to be dragons more easily dealt with using the Wyrmslayer, but it can allow her to contribute with very hard-hitting attacks against non-dragon opponents once trained.

Sheena's poor base stats appear in an even worse light in the high difficulties of New Mystery. Her tank unit design becomes largely irrelevant when enemies will double and rip through her like tissue paper, and her high growth rates are matched by many other units and worsened by her slow XP gain. Because of this, it is likely best for Sheena to leave the General classline behind. With a high bow rank of B in General, she is a surprisingly competent archery unit, with her gaining an A-rank when reclassed to Sniper, enabling her to wield silver bows or even Parthia at base level. This also minimizes the chances of her facing damage when striking enemies at a distance, making it overall preferable. That said, while this does allow her to contribute, she is not particularly impressive in this role, and will likely be outclassed by most other characters with workable bow rank.

Princess of Gra
Princess of Gra, a failing realm. Feels the heavy weight of responsibility. Appears in Fire Emblem: Mystery of the Emblem.

"Declining Marth's request, Sheena renounced her claim to Gra's throne and settled in the palace town. There, she lived as an ordinary but happy girl."

Sheena is illustrated in the trading card game with the following cards: 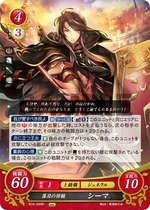 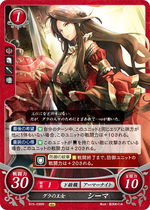 "Sheena" is an anglicized form of Sine and the feminine form of John, meaning "God is gracious" in Hebrew.