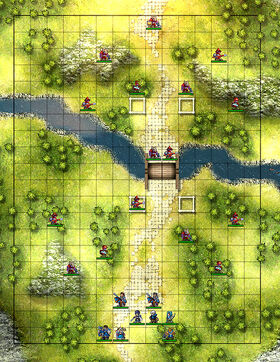 Chapter script
[view]
“Lissa introduces the other Shepherds. They head north to Regna Ferox to seek military aid against the creatures from the woods, now named "Risen".”
—Opening Narration

On these modes, the enemies aren't tough enough to do anything significant to your characters. This chapter eventually just becomes an all-out charge, destroying everything in your path with your main units.

Vaike doesn't have his weapon on the first turn, so he'll have to sit out of the slaughter until Miriel shows up on the second turn to give him his axe. The only units that will have trouble on this map are Lissa, Miriel, and Virion. These units either can't attack at all (in Lissa's case) or their defense stats compromise them to literally anything on the map.

Once you've defeated the initial wave of enemies, you can begin charging the next set. Oddly, the enemy AI will not turn aggressive if the player has a unit stand on the edge of the enemy range. However, the AI will begin its assault immediately should the player send a unit anywhere deeper into the enemy's range. This is likely intended to make it more difficult to take on the enemy units one at a time.

No enemy on this map, even the Risen Chief, poses even a slight challenge for any of your units besides the three listed above. As long as you keep those three safe from attackers, then you should be perfectly fine.

Lunatic mode makes this chapter hell for most players,and the Lunatic+ variant is even more brutal.  Chapter 2 sees the introduction of enemy units armed with Steel weapons. This, combined with the number of extremely fragile units the player is forced to bring to the field, makes the chapter arguably the most difficult in the entire game. This chapter, and the one that proceeds it, are the source of 75% of total resets in the game, largely in part due to the extremely limited time the player is allowed to prepare.

The chapter can be made a bit easier if Robin has a high defense stat. On Lunatic+ mode, however, the presence of enemies with Luna+ counters this. Unless the player has reached improbably high stat thresholds for The Avatar or Frederick, this chapter can only be won through blood, sweat, tears, and most importantly, luck.

The difficulty of this chapter varies drastically depending on how well trained Robin is up to this point. The following guide acts under the assumption that The Avatar has not been thoroughly leveled up beforehand.

Begin by shoving everyone to the southwest and keep everyone except for Frederick out of enemy ranges. Pair Frederick up with whoever gives him the highest strength, defense, and speed. If you have to choose between the three, pick speed, as it is more important to be able to double enemies here. You may have to do some tricky maneuvering to get certain units (such as Lissa and the weaponless Vaike) to the southwest edge safely.

Miriel will show up on the second turn. Have her pair up with Vaike, run to the corner, and then give Vaike his axe. This is the safest way to save these units. Frederick is probably relatively hurt, so you should drive Frederick up into the mountains for the terrain bonus (and as a lure for attacking enemies) so that he has higher avoid. Once here, have him use either a vulnerary or one of Virion's elixirs to bring him back up to speed.

When the enemies attack again, you may be faced with a small crisis. Frederick's silver lance certainly isn't unbreakable, and this is the chapter where most people usually end up breaking it, whether they mean to or not. This is the time to equip Frederick with either Sully's bronze lance (which is extremely easy if you paired Frederick up with Sully in the beginning) or your Avatar's bronze sword. This way, you can give Frederick the ability to attack again without making another ally seem inferior.

Once you've defeated the initial wave of enemies, you should push your units upward. Have any units that took damage during this onslaught be healed by Lissa, and have her be healed by one of the forts as to not waste her vulneraries. As with Normal and Hard mode, the AI will not turn aggressive until the player has stepped one tile past the edge of its attacking range.

In order to catch their attention, you should charge up into one of the forts and attack the enemies close by. You should especially try to defeat the enemies that drop iron weapons, as these will restore some of Frederick's overwhelming power. Have your other units stay far away from this skirmish. When the Risen Chief comes to attack Frederick, you should equip him with the iron sword to counter the Chief's hand axe. Make sure you center your brawl around one of the forts, and make sure not to let the Chief enter one of the forts.

Once you're completed the level, take a break and give yourself a pat on the back. The next chapter is almost as bad as this one, so you should rest awhile to gain back your sanity.