Matthew Mercer
[view]
“I'm at fault for being a child too long. My eyes have been closed. But my heart has been opened. I can imagine, a little, what it must feel like to live in your world. Still you find it in yourself to sing. And so must I.”
—Shigure to Azura in his Paralogue Surprise Duet

Shigure is a playable character in Fire Emblem Fates.

In his Paralogue, Shigure is fleeing the Vallites when he crashes onto a ship that Corrin and their allies were on. Azura is surprised to see him here, but he tells her that strange warriors had been pursuing him from his Deeprealm. Azura is surprised that they are also targeting him, while Shigure is unaware about his mother's powers and the past. Two large ships broadside theirs in the process. Shigure asks Azura if he may fight so that he may avenge his friends, but Azura refuses to let him and asks him to hide somewhere, much to his disappointment. After the battle, Azura tells him that she went to his Deeprealm to find the village destroyed and its inhabitants killed. Shigure sings Lost in Thoughts All Alone as a requiem for his fallen friends. He then asks her if he may join them, having no where else to go. She initially rejects his offer, but changes her mind so that she may protect him.

A different Shigure acts as the narrator of the DLC Heirs of Fate set, giving the player insight about his world where Corrin and their allies tried to defeat Anankos (therefore following the Revelation path), but failed to. While it is unknown what happened to them, it can be presumed that they died and were returned as corpses bent to Anankos' rule, barring Corrin and Azura.

In Heirs of Fate 6, Shigure confronts Anankos, who in his insanity, mistakes him as Cadros. Shigure prepares to sing the fourth verse of the song, while Anankos pleads with him not to, as he is aware of what will happen if he does. Shigure is suddenly stopped by the children, who teleported back in with the the same crystals Anankos had given to Odin and Laslow, which the two respectively passed to Ophelia and Soleil before their deaths. While Shigure is upset with the fact that he was close to stopping Anankos, Anankos views this as betrayal and summons his Vallite forces to stop him.

Shigure has a natural love for the arts and is especially fond of singing like his mother. He is also a skilled painter, as shown in his supports with his father and during the DLC Anna on the Run where he says that despite being a skilled painter, cannot tell any difference between the brothers in the pirate gang. Humble, Shigure does not let many people see his painting and even initially refuses to have a tent exhibit of his art when his father first suggests it.

Shigure loves his parents, painting a special picture of the two which he claims is his greatest work, a sentiment his father shares. Shigure is aware of the dangers that his mother's abilities are doing to her during the war. Nonetheless, he respects her decision to bear the burden and upholds a promise to rid her pendant should she die.

Calm and serene, Shigure has an affinity for woodland creatures who are drawn to his gentle aura and singing ability. Even large bears are tame and mild around him. He can be socially awkward and has difficulty matching the pace of some of his more excitable fellow children and even initially refuses to bond with his sibling until he realizes that he was being cold. This also makes him moody at times, but is quick to apologize for any sort of rude front he may be projecting at them.

Shigure developed a close bond with his Deeprealm caretakers, notably wailing when news arrived that none survived the attack by invisible soldiers. The reason for Shigure's hairstyle is revealed in his supports with Sophie. One of his old vassals, who Shigure was pretty close to, used to wear his hair like that. They traded hairstyles the day before their village was attacked. Shigure decided to keep it that way to honor his friend. Shigure greatly cares for his mount and the two often ride together during downtime, establishing a close bond that he brings up in several supports such as with Caeldori and Selkie. His riding ability is due to the fact that he likes high places the most in the army.

Note: He can be the brother of any of them, with the exception of Corrin.

*Shigure will receive whatever secondary class that a Female Corrin and a Female Kana who isn't his sister have access to, if he has achieved an S Support with either of them.

**Shigure will receive Wyvern Rider from Azura if Jakob is his father, because of class conflict. Both parents pass down their classes, Father's class will pass down first, then the Mother's class. Since the Songstress class cannot be passed down to any of Azura's children, the game would normally look into her reclass, Sky Knight. But this is also Shigure's base class, so the game will instead look into the parallel class from Azura's base one, which is Troubadour. And since this class is already passed down by Jakob, the game will then finally look into the parallel class of Azura's reclass, thus granting Shigure Wyvern Rider.

Uplifting Artist
Azura's son. A sensitive, gentle artist with a voice to rival his mother's. Appears in Fire Emblem Fates.

Dark Sky Singer
A descendant of the songstress Azura. Sings in Cyrkensia while hiding his identity. Appears in Fire Emblem Fates. 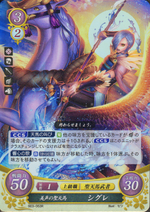 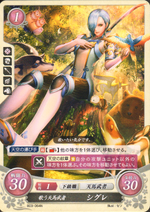 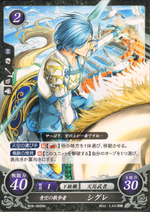 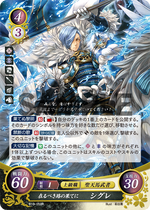 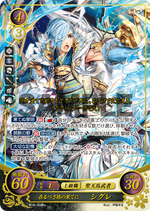 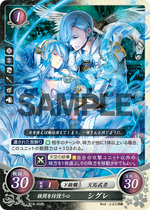 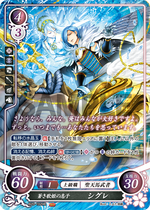