Sky Knight
[view]
“Still you find it in yourself to sing. And so must I.”
—Shigure in his Paralogue Surprise Duet

Shigure (シグレ) is a playable character in Fire Emblem Fates. He is voiced by Yoshimasa Hosoya in the Japanese version and Matthew Mercer in the English version.

Shigure learns the forth and final verse of Lost in Thoughts All Alone and is told of the consequences that could happen if he sung it. Shigure spends his time during the first three parts of Heirs of Fate singing about several phrases and gives a mysterious meaning behind it. He does not actually appear until Heirs of Fate 4, where he stops both Kanas from fighting each other in dragon form and explains to them about his world, and is distraught with worry when the Hoshidan and Nohrian children leave due to conflicting reports about the war.

In Heirs of Fate 6, Shigure confronts Anankos, who in his insanity, mistakes him as Cadros. Shigure prepares to sing the fourth verse of the song, while Anankos pleads with him not to, as he is aware of what will happen if he does. Shigure is suddenly stopped by the children, who teleported back in with the the same crystals Anankos had given to Odin and Laslow (and somehow ended up in the hands of their children). While Shigure is upset with the fact that he was close to stopping Anankos, Anankos views this as betrayal and summons his Vallite forces to stop him.

**Shigure will receive Wyvern Rider from Azura if Jakob is his father because of class conflict. Both parents pass down their classes, Father's class will pass down first, then the Mother's class. However, Songstress cannot be passed down, so the game would look into her reclass, Sky Knight. However, this is also Shigure's base class, so the game will look into the parallel class from Azura's base class, which is Troubadour. However, because this class was already passed down by Jakob, the game will then finally look into the parallel class of Azura's reclass, thus granting Shigure Wyvern Rider.

CG artwork of Shigure in the Hoshidan Festival of Bonds DLC episode donning a Japanese yukata. 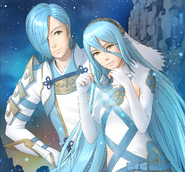