Imbued with the special property of inflicting magical damage, the Shining Bow can be used in close-range combat, although it compensates for these strengths by being incapable of triggering critical hits or offensive skills. The Shining Bow is best paired with characters that have high magic.

In Fire Emblem: Path of Radiance, it was called the Bright Bow (ブライトボウ). Although the basic functions and details of the bow are finalized, it does not appear in the final version of the game, and can only be acquired with the aid of cheat codes. As its name suggests, the damage dealt by the Bright Bow each time it is drawn is Light magic-based.

In Fire Emblem Echoes: Shadows of Valentia, the Shining Bow is known as the Radiant Bow (光の弓, lit. Light Bow). It retains the effect of dealing out magical damage and grants the ability to deal effective damage against Terrors.

In Fire Emblem: Three Houses, the Shining Bow is known as the Magic Bow (魔法の弓 Mahō no Yumi). While it retains the effect of dealing magical damage, it no longer has the ability to deal effective damage against Monsters.

Concept Artwork of the Bright Bow.

Concept art of the Radiant Bow from Fire Emblem Echoes: Shadows of Valentia.

Sprite of the Shining Bow from Fire Emblem Heroes. 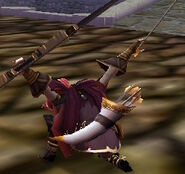 The quiver of the Shining Bow attached to Anna's back.

Python wielding the Radiant Bow in Shadows of Valentia.