Joey Pepin (Radiant Dawn)
Brendan McKian (Heroes)
[view]
“A single arrow, right between the eyes? Who else could make a shot like that? No one, that's who!”
—Shinon

One of the veterans of the group, Shinon is a sarcastic, self-interested man who is seen as uncooperative, but is good friends with Gatrie and had great respect for Greil, which can be revealed in a support with Janaff where he defends the deceased commander. On the other hand, despite his admiration of Greil, he constantly treats Ike like a foolish child and finds the idea of Greil's son serving as his commander insufferable. In addition, he is prejudiced toward the Laguz, referring to them as "sub-humans".

While his sharp tongue is infamous among the group, his skill with a bow is absolute, as he taught Rolf (who practically idolizes him) the art of bow-making, and though he can be strict, occasionally displays a gentler side too.

After Greil died and Ike became leader of the Greil Mercenaries, Shinon made a show of his displeasure by leaving the group with Gatrie.

Later on, Shinon encountered Ike’s group as a mercenary working for the Daein army to help stop Ike's forces from advancing across the Daein border. After being persuaded by a confrontation with a pleading Rolf and a matured Ike, Shinon rejoined the mercenary group.

After the Mad King’s War, he continued to polish his bow skill. During the Crimean Rebellion, Lucia had gotten captured and faced execution by hanging. Right at the moment she was to be hanged, Shinon showed off his skill when he shot an arrow to cut the rope right above her head with great precision from atop a faraway tree.

Shinon is a selfish, cynical, and irreverent man. Aware his skill is invaluable, he is explicitly arrogant and tends to cause friction between himself and others, whether acquainted or not.

Blatant in his show of disrespect for anyone he feels has not earned it, Shinon finds entertainment in hurling insults at anyone he deems fit to receive them, and often mocks people to their faces. Conversely, he is immensely loyal to Greil, and pays Titania proper respect as Deputy Commander, as both are, in his eyes, worthy of it.

For unexplained reasons, he is extremely racist towards Laguz. Though he seems to develop respect for Janaff in their A support, this may be largely due to the hawk's age and experience. In Radiant Dawn, he talks down and refers to laguz characters Lyre and Kyza using racial slurs regardless of a transfer support with Janaff. That said, he seems to have some respect for battle prowess, because he will stop himself from using a racial slur and instead use "laguz", and refer the kings Tibarn and Caineghis with the proper respect.

Instances of compassion and fondness are seen in his supports with Rolf, whom he mentors in the arts of archery and bowyery. He insists that Rolf do nothing to repay him for any of it, and implies that watching Rolf learn and grow has been far more rewarding than any thanks. Shinon then challenges Rolf to surpass him in skill and tells him his greatest pride would be a student so excellent as to do so.

Gatrie, too, seems to developed a bond with Shinon. Though he is gullible and often falls prey to scam artists, Shinon enjoys his company, and the two are implied to frequent bars or taverns, as well as spend their downtime at camp together.

He does not like to appear openly sympathetic towards anyone, but cares deeply enough for the Greil Mercenaries in Radiant Dawn to take on extra work to discretely earn money for the cash-strapped group. He is implied to have an alcohol problem in Path of Radiance, and reveals he comes from an unloving childhood in Radiant Dawn, which may support the bitterness and cynicism in much of his dialogue.

Shinon will join early on, in an aspect similar to Titania, being powerful early on, but unlike Titania, after a brief period of time, he will leave. His base stats are rather low when you re-acquire him after completing Chapter 18, but this is offset by amazing growths. Shinon's growth rates ensure that he can reach par with other units fairly quickly if he levels fast enough. In addition, Shinon has an A Rank in bows, which Rolf may not reach for a couple of more chapters during the time Shinon is recruited. Statwise, Shinon will end up with less strength, speed, and luck than Rolf, but higher HP and similar skill, defense, and resistance. Shinon is also one of the few characters that will make good use of the Gamble skill scroll, as he should be able to hit reliably enough even after the bane to hit rate Gamble inflicts. In turn it will bolster his already great critical rate thanks to his class bonus.

Generally, Shinon is let down in his second joining by the lack of relevant niche for a Sniper in Path of Radiance. Much of the later combat in the game focuses on being able to clear out large numbers of enemies through counterattacks, something Shinon will never be able to do well, as he can only counter fellow bow-users or ill-placed units with 1-2 range. This is exacerbated by his Provoke skill, which causes enemies to target him preferentially. In the early game, it is helpful, as it lets him bait them away from still-weak allies, but upon his rejoining, enemies need little prompting to go after a frail unit who generally cannot respond to their attacks. While bows are effective against fliers, that effectiveness is only double, meaning that particularly durable fliers like Wyvern Riders can still often survive hits from Shinon. For the most part, Shinon can be a hard-hitting unit, but his single-target focus reduces his actual utility by a wide margin.

Shinon is much easier to use in Radiant Dawn, due to his solid base stats. He is a lot easier to train than Leonardo and Rolf, and is therefore the preferred choice. Furthermore, Shinon possesses excellent Bonus Experience potential, as his Skill and Speed and HP are nearly capped when he joins the player's army. In conclusion, Shinon is a great contender for your Marksman of choice who will be able to wield the extremely powerful Double Bow on the last chapter, which not only makes him an even deadlier character than before but also grants him the ability to attack from close range.

Scathing Archer
A sniper with the Greil Mercenaries. Has a sharp tongue and is a master of the bow, a fact that neither he nor his foes will deny. Appears in Fire Emblem: Path of Radiance.

Shinon is a Colorless Bow Infantry unit who has incredible offense sitting on neutral 38 Atk and 42 Spd. His overall bulk score is mediocre however, allowing him to take hits from both sides of the damage spectrum, but nothing that makes him particularly proficient at baiting enemy units. For the most part, he does not have a particular weakness, but he is yet another unit who needs to be utilized properly in order to make full usage of his skills in his base kit.
Shinon's Double Bow accelerates his Special cooldown and carries the standard effectiveness against flying unit. Shinon paves a path that solidifies him as a solo unit who prefers to be left away from his allies. When he is not adjacent to an ally he gains a Close Counter effect, being able to counterattack against adjacent enemies, as well as gaining a potent +5 to his four core stats, improving his performance overall and makes him even more deceptively stronger than he may seem at face value.
Shinon introduces a new inheritable Special Skill, Deadeye. Like its Tellius source, it is a Bow unit exclusive special. It takes three attacks to charge and doubles the damage he deals as well as disable skills that reduce damage such as Fallen Lyon's Blood Tome, Brave Ike's refined Urvan, or skills such as Repel. It is a perfect special to pierce through problematic wall units, though he will need it active in order to reap the full benefits.
If he is not adjacent to a foe, syncing with Double Bow's conditions, he gains Atk/Def+7 thanks to Atk/Def Solo 4, making him even more deceptively physically bulky with a massive +12 to his 27 neutral Def. Lull Attack Speed inflicts an Atk/Spd-3 penalty on his foe during combat and neutralizes any bonuses on his foe's Atk/Spd as well. Time's Pulse accelerates his Special cooldown if his Special is charged at the start of his turn, essentially making his Special a 1 attack cooldown.

Double Bow is extremely powerful, but like most Solo oriented units, he is a victim of bad AI who can place him next to his ally, thereby disabling his Bow and Skill A. Otherwise, despite what is mentioned above, Fallen Lyon can check him but only if Deadeye is not charged. Despite his massive strengths and deceptive physical bulk, mages can still inflict heavy damage as can Dragon units as he gains only a +5 boost to his Res. Poking him out with Staff units can also help as they can engage him without worrying about counterattacks.

Shinon's starting kit is perfectly suited to get him going into the Heroes metagame. His only empty slot is his Assist Skill which can be easily filled with either Reposition or Draw Back as are standard options for infantry units.

Sharptongue Ninja
A skilled sniper, but...also a ninja? A man who values competence more than anything, and is not afraid to say so. Appears in Fire Emblem: Radiant Dawn.

Quote as an enemy

“My arrows will find you no matter where you run.”
—Shinon's default battle quote in Chapter 18.

Shinon lazes the days away in his old haunts. An expert at all he put his hand to, he chose none as his calling.

Shinon is illustrated in the trading card game Fire Emblem Cipher with the following cards: 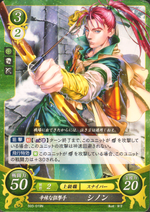 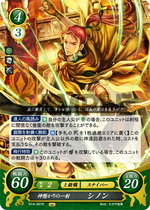 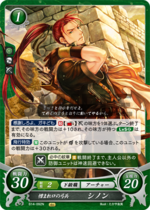 In the Odyssey, Shinon (commonly romanized as Sinon, from the Greek 'sinomai' meaning 'to harm' or ' to hurt') was a Greek who, after the other Greeks pretended to sail away, convinced the Trojans to take the Trojan Horse into the city. He then opened the wooden horse's stomach and released the warriors hiding inside, thereby bringing about the destruction of Troy.