Kaiji Tang
[view]
“The last thing I want is for the line of successors to end with you... For the sake of you, Grandfather, and all the others who have wielded Raijinto... I must be prepared to take the lives of my enemies and protect the kingdom. Even if I get caught up in the heat of battle, I will not forget my resolve...”
—Shiro speaking to his father.

Shiro is a playable character in Fire Emblem Fates.

Shiro is the son of Ryoma, the cousin of Kiragi, the grandson of Sumeragi and Ikona, and step-grandson of Mikoto.

In his Paralogue, Shiro departs from his Deeprealm and ends up in a barren desert in the real world. Upon entering, Tarba ambushes him and threatens to kill him if he does not give up his equipment. Shiro refuses and prepares to fight Tarba and his gang despite being vastly outnumbered.

Fortunately, Ryoma and Corrin's forces arrive, after receiving word from Shiro's caretakers that he had gone without a trace. Ryoma is upset that Shiro left his Deeprealm, having not been taught anything about the real world. Though he suspects his father his royalty, he confuses his title as the "Big Cheese" of Hoshido and is soon confronted by Tarba, who demands him to give up his equipment or die. Shiro refuses and prepares to fight Tarba and his gang despite being vastly outnumbered.

Following the battle, Shiro learns from Ryoma that he is actually royalty, though he is angered that Ryoma had kept his identity a secret. Ryoma tells him that he did not reveal it because he felt that he was not mature enough, though Shiro states that if he had known, then he would have tried harder. Shiro also admits that he is scared because he had been taught how to fight, but not to kill. Ryoma admits that he was wrong in concealing his identity, but asks Shiro what he observed in the fight. Though hesitant to succeed Ryoma as he grows, Shiro decides to join the army to learn more about his father and the role he plays in protecting Hoshido.

Following a battle, the Hoshidan children led by Shiro (who for story and gameplay effects is a Swordmaster rather than a Spear Master) are badly injured. After a short argument in which they reveal that their parents have also gone missing, the children are attacked by invisible soldiers. Afterwards, the invisible soldiers regroup. Shiro attempts to attack them, but he is stopped by Asugi, who is later wounded by them. After the next battle, the soldiers retreat, and Shiro's Rajinto reacts with Kana's Noble Yato and turns it into the Blazing Yato.

After joining forces, Shiro comments on the war with Siegbert and surprises him by saying the Hoshidans won. He also mentions that Xander and Elise died, while Siegbert shocks him by saying that it was the Nohrians who won and both Ryoma and Takumi died. This leads to both agreeing that it is in best for them to act separately. However, they eventually join forces to stop Anankos, and Shiro is reunited with his father at his Deeprealm.

Shiro has a foolhardy personality, despite being a very skilled fighter. When he sees a challenge, he rushes in without giving a second thought. As a result, he often puts himself in danger. However, he is extremely friendly, sociable and easy to get along with, as seen in his many supports, and is open minded and accepting of people with unique traits such as Nina. He is also extremely fond of chicken, as seen in his supports with Selkie and Rhajat. He reveals in his support with Selkie he enjoys bbq sauce on his chicken.

Taking a role of elder brother to some of the children, In his supports with a non-sibling male Kana, Shiro attempts to cheer him up because due to the rain Kana can't go outside and play; With female Kana, he takes on the role of a big brother, giving her piggyback rides and spinning her around in circles, much to her delight; In his supports with Kiragi he helps his younger cousin with hunting by doing the heavy lifting; And in his C support with Midori he helps her out with the large amount of herbs she picked and can't move.

He also has a quick-thinking and reckless mindset, as shown in his supports and paralogue. He attempts to fight Tarba's gang when he's ambushed even though he is not experienced enough to handle them. During Shiro's C Support with his father Ryoma, he unintentionally tells him that he only trained in the use of naginatas so that he could beat him in a duel, knowing that lances beat swords in combat. He also asks his mother for proof that his father truly cares for her, as he does not believe so because Ryoma is rarely around them.

He is a bit insecure about inheriting the throne of Hoshido because he believes that he is not capable enough to rule the kingdom. Primarily, his father is one of the most capable and popular men in the kingdom. Compared to his father, he feels that he does not have as much talent. Therefore, he suggests to Corrin that they should inherit the throne of Hoshido after his father's rule. Though unlike his Nohrian counterpart, Siegbert, his insecurity is less apparent and he doesn't worry himself to death about it. In the end, he changes his mind to dedicate himself to train hard, so he can inherit the throne and Raijinto.

As stated in his surge quote, he apparently has lucky smallclothes. He is the strongest arm wrestler out of everyone in the army.

Note: Add 10% to all growths if Shiro inherits the Aptitude skill from Mozu.

*Shiro will receive whatever secondary class that Male Kana has access to if he has achieved an A+-Support with him.

*Shiro will receive whatever secondary class that Corrin or Female Kana has access to if he has achieved an S-Support with either of them.

As a Spear Fighter, Shiro comes with Seal Defense to let him soften up opponents and Swap, which isn't especially useful. Shiro tends to have good growths in Speed and Skill, so he should hit enemies often and be able to double most enemies. The Spear Master class improves on his strong points, as well as offering useful skills in Seal Speed, which can let him cripple an opponent for a teammate to finish later, and Lancefaire to boost his damage output with Lances. Despite his underwhelming Magic growths (save for a select few mothers), the Basara class is worth considering too. It offers useful skills in Rend Heaven, which can help Shiro take down powerful enemies and Quixotic, a high risk skill that can help him hit more often and trigger Astra and Rend Heaven more often.

Shiro will inherit the Samurai line from his father. Duelist's Blow and Vantage are both fairly useful skills, with the former being generally more useful. As a Swordmaster, Shiro will be perfectly competant in that class; however, due to having to start at E rank Swords and not having access to his father's signature Raijinto will make Ryoma a superior choice in this role for the most part. However, with the right mother he can still stand out from his father: Rinkah can pass him Lancebreaker to negate his weakness to Lances. Master of Arms lets him use his favored Lances again, as well as offering good all around growths. Seal Strength can be combined with his pre existing Seal Defense and Seal Speed to make any unit he can't eliminate an easy target. Life and Death is more of a gimmicky skill that can nonetheless let him inflict high damage, particularly in combination with Swordfaire and/or Lancefaire. Overall, Shiro is an excellent unit and a solid addition to your army, so long as you don't force him to directly compete with his father.

You could also have Ryoma pass down a skill from one of his Friendship Seal classes - he can grab the Cavalier line from Silas and Xander, then give Shiro a skill from there. Luna is a more consistent option than Astra or Rend Heaven; Armored Blow can help him take out physical units while Aegis can help him shave off indirect damage.

Raw Talent
Ryoma's son. Doesn't slack on training. Outgoing and easy to get along with. Appears in Fire Emblem Fates.

Shiro is illustrated in the trading card game Fire Emblem Cipher with the following cards: 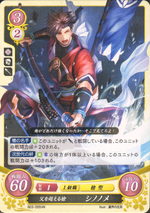 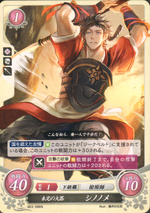 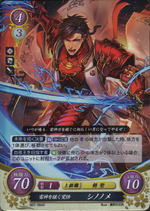 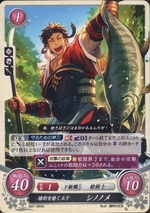 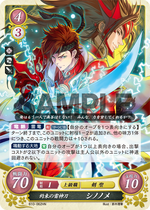 Shinonome is the name of a Japanese destroyer boat as well an an area of Koto, Japan. When written in Kanji (東雲) it means daybreak.