“Aye, Archduke Lion! I will follow you anywhere!”
—Shirou, in a conversation with Lionheart

Shirou (シロウ Shirō) is a playable character from TearRing Saga: Utna Heroes Saga. A horseman from Salia, he is the most trusted subordinate of Lionheart. He is sent with Runan when he parts ways with Lionheart at the end of Map 17.

In the ending, Shiro remains at Lionheart's side and returns to Salia alongside him.

Automatically from the start of Map 18.

Shirou is a unit who is best described as average. He has a somewhat slow start, but he grows more competent as he gains levels. Unfortunately, his promotion gains are fairly low, which also negatively affects his stat caps. Combining all of this with his average skillset, Shirou is a rather mediocre unit who will not likely become any better than slightly above average.

Shirou's battle model as a Horseman. 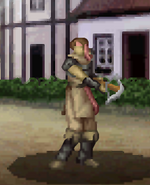