Chapter 7: The Shield of Thracia

Myrmidon
[view]
“Just one thing: don't talk so lightly about throwing your life away. There's nothing more loathsome than people rushing toward their own death.”
—Shiva to Safy.

Shiva is a playable character from Fire Emblem: Thracia 776. A 30-year-old mercenary from Savan, he is originally hired by the Lifis Pirates.

Shiva first appears in Chapter 2x, where he warns Lifis not to touch Safy before departing to face Leif's army in battle.

Shiva later reappears in Chapter 7 when Leif is on the run, where, drawn to the allure of a huge bounty placed on the prince, he attempts to stop the prince in his tracks. Safy is able to talk to him in this chapter, where she asserts that she will sacrifice herself in exchange for Leif's. This convinces Shiva to lend Safy his aid and join Leif's army.

Shiva then goes on to continue supporting Leif in his cause to liberate Northern Thracia from the Grannvale Empire. He disappears thereafter, with no one source able to confirm his whereabouts after the conclusion of the war.

Aloof and intense, Shiva strikes fear in all who come into his presence, befitting of his position as a mercenary killer for hire. This is shown through his small interaction with Lifis in Chapter 2x, where the latter is clearly terrified of Shiva despite being his employer.

Yet beneath this tough exterior is a propensity for compassion, particularly directed towards women. Having taken a liking to Safy, he is willing to detract from his wandering ways to pledge his blade to Leif's cause, knowing that this will make her happy.

Shiva will make a great addition to your team if you made it to Chapter 2x. In this chapter, you can ignore him since he is not guarding the goal.

In Chapter 7, recruiting him can be difficult to do since he will doggedly follow the group of Myrmidons he starts next to, remaining close to the group even as Leif's army makes its way down the map. Keep Leif's army close to the turn into the downward path, but maintain some distance as well, carefully moving Safy and Finn to the right of the Myrmidons to lure Shiva.

You can also send Karin in, preferably equipped with a scroll to prevent any critical attacks. She can then lure the group into a chokepoint until Safy catches up. After dealing with the Myrmidons, let Shiva capture one of your units like Lara, as this will make him escape south, Safy will be able to safely talk to him.

With a FCM of 4 and support from Safy, Shiva is almost guaranteed to score a critical hit on his follow-up strike when his Skill is high enough. Early on, his trademark Killing Edge ensures his critical rate on his follow-up attack is well over 100%.

The potential of the Levin Sword shines in the hands of Shiva. With the additional +5 Skill, not only will he be able to consistently land critical hits, but his Sol skill will also activate very often, making Shiva capable of devastating groups of enemies in rows by himself, either at close or far range. He is also an excellent candidate for the Luna Manual, as Luna's activation is reliant on Skill.

Shiva's Speed growth is unusually low for a Myrmidon, but this is made up for by his decent base Speed. By contrast, his Defense growth is the highest compared to other Sword users. Regardless of this oddity, Shiva's growths will make him a competent physical combat unit, and his promotion to Swordmaster further gives him Adept to boost his offence even more. To top things off, his single Movement Star enables re-action from time to time.

As far as scrolls go, Shiva might appreciate getting the Od scroll early on, as it will increase his chances of activating Sol or landing a Follow-up Critical. When used alongside the Baldr and Fjalar scrolls, it will almost guarantee Skill increases upon each level up. The Ced scroll can help fix his mediocre Speed growth.

On the whole, Shiva is an amazing unit who is on par with the powerful Mareeta.

"After the war, Shiva's whereabouts became unknown. He took great pains to conceal himself from prying eyes. Many unanswered questions surround this enigmatic figure in history. Scholars have proposed various theories about his origins and activities after the war, but none of them are credible."

Shiva is illustrated in the trading card game Fire Emblem Cipher with the following cards: 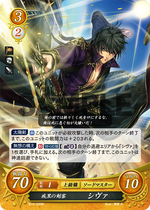 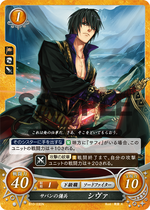 Shiva is an important deity in Hindu religion.

Artwork of Shiva in Fire Emblem 0 (Cipher) by Clover K.

Artwork of Shiva in Fire Emblem 0 (Cipher) by Clover K.

Shiva as seen in the TCG as a Level 10 Myrmidon.

Shiva as seen in the TCG as a Level 15 Myrmidon.

Shiva as a Swordmaster in Fire Emblem 0 (Cipher).

Shiva as a Myrmidon in Fire Emblem 0 (Cipher).