The Shockstick (しびれる槍 Shibireru yari, lit. Stun Lance) is a Lance that hails exclusively from Fire Emblem Awakening. This lance is latently imbued with lightning magic, permitting its wielder to inflict magical damage instead of physical damage onto their opponents when equipped. In Fire Emblem Fates, there is a Hoshidan weapon similarly known as the Bolt Naginata. 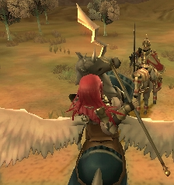