In Three Houses, the Short Bow is once again referred to as the Mini Bow in localized versions of the game. This bow, unlike in Fates, can be used at both ranges of 1 and 2. However, it cannot make follow-up attacks at 1 range, and it lacks the ability to deal weapon effectiveness damage to Flying units. 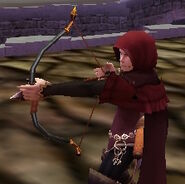 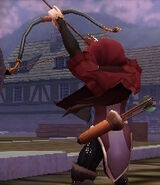