Sibling Bonds (兄妹の絆, Kyōdai no Kizuna lit. Bonds of Brothers and Sisters) is the second paralogue of Fire Emblem Heroes. 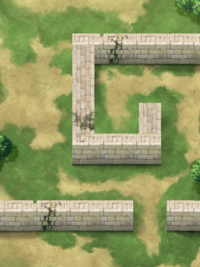 You will have 4 units on your team. You will also have 2 opponents and 2 bosses: Klein, Sanaki, an Emblian Bow Fighter, and an Emblian Green Mage. Have your red mage unit stand beside the middle cracked wall so the Emblian Green Mage will be lured into attacking it while moving your defensive ranged units (or units with weapons that can counterattack from any range) south but out of range. After Sanaki tries to break the wall used a blue ranged unit to take her out, then move your defensive ranged unit/counterattacking enemies into the tile below your red mage unit. Once Klein is taken out, the bottommost archer will try to take out the obstacle. At that point try to take out the archer or bait him into attacking. 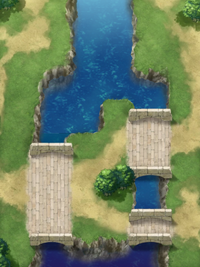 You will have 4 units on your team. You will also have 2 opponents and 2 bosses: Reinhardt, Olwen, an Emblian Axe Cavalier, and an Emblian Red Mage. Put your sword unit northeast from your northeastern-most position so it can tank the cavalier's attack. Meanwhile move your green mage users towards Olwen so she will attack them. After they're taken out move your blue mage within range of Reinhardt and the red mage. If Reinhardt doesn't fall, you can use your sword unit/green mage users to take him down. 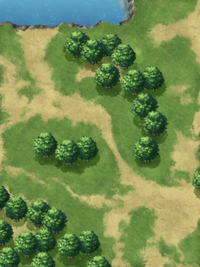 You will have 4 units on your team. You will also have 2 opponents and 2 bosses: Eldigan, Lachesis, an Emblian Axe Cavalier, and an Emblian Lance Cavalier. Use a blue flier with decent defense to move into Eldigan's range to lure him into attacking it. Group the rest of your units below the enemy's range. Be aware of the cavaliers buffing Eldigan when he moves into attack. Once your turn comes move one of your mages into range of Lachesis. After she is taken out move in your red melee unit to the west to take on the axe cavalier. The lance cavalier will rally his speed before the axe cavalier moves in. After that use an axe unit to take down the remaining cavalier.