The Sidelong Yumi (横撃ちの和弓 Yoko uchi no wakyū, lit. Side-Shooting Wakyū) is a Yumi that is introduced in Fire Emblem Fates. The Sidelong Yumi is one of three Yumi capable of attacking at close range, allowing archers to retaliate back against units up close (the others being the Mini Bow and Shining Bow). However, the user is unable to perform follow-up attacks and loses 5 effective speed during the battle. It is further marred by its avoid penalty, low chance to hit, and lackluster might.

Yumi is the kun'yomi reading for the Chinese character gōng (弓), which in Japanese on'yomi is pronounced as kyū. Wakyu (和弓) translates to "Japanese Bow", the kanji which is pronounced wa in on'yomi and kazu in kun'yomi is borrowed from the Chinese hé (和), which means "harmonious" or "harmony". 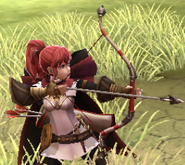