[view]
“Ofttimes when I am caught in the gazes of our people, I am struck with fear. Their eyes are so heavy with expectation, and there are so many of them... I feel I must be nothing less than perfect in their eyes. And this vexes me.”
—Siegbert speaking to his father

Siegbert is a playable character in Fire Emblem Fates.

Siegbert is the son of Xander and the cousin of Forrest, as well as one of the two paternal grandsons of Garon. Like the other children of Fates, Siegbert was placed in the Deeprealms to keep him safe from the war. Siegbert became particularly close to his father and would spend his days learning all he could from swordsmanship to penmanship in an attempt to impress his father whenever he would visit. He also would regularly receive news of his father's efforts in the war.

In his Paralogue, Xander pays his Deeprealm a visit. Although Siegbert is happy to see his father, Xander's visit is interrupted by invisible forces that have been invading his realm constantly as of late. Siegbert rushes off to battle the enemies as Xander follows close behind. Xander notices that they appear from the water pools around the forest which the invaders are coming from. After utilizing all Dragon Veins in the forest to stop the invasion and routing those already present, Xander notices that this is not the first time Siegbert's Deeprealm has been attacked and asks why he did not notify him. Siegbert tells Xander that he believed that by fighting off the invaders on his own, he could prove that he was worthy of being his son. Xander is proud that Siegbert took on the responsibility to fight off the invaders without having to teach him to do so. Xander asks that Siegbert be comfortable with telling him anything on his mind. Siegbert asks if he can join Xander's army, stating that he can now fight alongside him to help Nohr. Xander warns Siegbert that the enemies on the battlefield will be much more dangerous then the ones they had just dispatched, and allows him to stay in his Deeprealm if he wants to. Siegbert is unfazed by Xander's grim message and readily joins the army.

After being defeated by some of the Hoshidan children, Siegbert and his group decide to stop and rest for a while. After persuasion by Soleil, Siegbert decides to enter another battle.

Elsewhere in a Deeprealm swamp, a group of Vallite soldiers decide to retreat and pursue Forrest's group. As his group is leaving, Forrest spots Siegbert, but hopes that he can fend off the soldiers. Siegbert thinks that he also saw Forrest, but due to uncertainty if his eyes were playing tricks on him, he decides to press on.

At the Great Wall of Suzanoh, Siegbert and his group fight the Vallites when Forrest's group arrives. The two work together to question the invaders and eventually defeat them in battle.

Reaching a standstill, Siegbert offers his assistance to Kana, whose Grim Yato reacts to his Siegfried and transforms into the Shadow Yato. When both Kanas turn into dragons, Siegbert and Forrest attempt to calm down the male one, but they are stopped when Shigure intervenes.

After they join forces, Siegbert and Shiro comment on the war. Siegbert is surprised when Shiro says that the Hoshidans won the war and Xander and Elise died, and shocks him in turn by mentioning that the Nohrians won and both Ryoma and Takumi died. This leads to both of them agreeing it is best to act separately.

Despite this, they eventually realize the error of their ways and rejoin forces to take down Anankos once and for all. Using their own memories as a substitute for the payment required for Shigure to seal him away, they eventually forget about their encounter, and Siegbert is returned to his own Deeprealm.

Siegbert is kind, serious, straightforward, and a culturally refined elite. The stress of being Xander's son weighs heavily on him, and he frequently feels inadequate and useless in comparison. The weight of the expectations from not only others but himself scares him, and he tries very hard to exceed the expectations of both his father and the people of Nohr as a future king. He constantly compares himself to his father, believing him to be the end-all-be-all role model. However, his efforts are far from good for his mental health, as he berates himself and refuses to be seen as weak in the eyes of others. He regards having hobbies and things he enjoys outside of princely duties as weaknesses, and will hide these things from everyone but the ones he deeply trusts. He cares very much about the people around him, and will go out of his way to ensure they're doing well and are safe.

Siegbert is shown to be very protective of his cousin Forrest as shown in his support conversations with him, always trying to accompany Forrest on his trips to town in order to protect him from harassment and ruffians. Much like his father Xander, Siegbert isn't above serving in the front-lines. In fact, his A-Support conversation with Ignatius reveals that he feels compelled to fight alongside his friends rather than stay in the back.

He has the whitest teeth in the entire army.

Description: Xander's son. A king to be he received the finest education. Serious and kind.

*Siegbert will receive whatever secondary class that Corrin has access to if he has achieved an A+-Support with him.

*Siegbert will receive whatever secondary class that Corrin has access to if he has achieved an S-Support with her.

Siegbert starts off as a Cavalier, a class he is well suited to due to his balance of power and overall bulk. He also starts out with a C Rank in both Swords and Lances. On recruitment he will already have Elbow Room, a useful skill for the endgame in Fates due to the final chapters taking place indoors. Both of Cavalier's promotions offer useful skills for Siegbert to learn: Great Knight offers Luna, a solid attacking skill that helps in taking down bulkier enemies. It also offers Armored Blow, which can make Siegbert very difficult to bring down when he initiates the attack. Paladin offers Defender, a moderately useful skill in the early to mid game, although it falls off later. Aegis can help him shave off indirect damage, and can also help patch up his low resistance. Siegbert can do well in either of his base promotions, and it's largely up to player choice depending on whether you prefer the Great Knight's power and bulk or the Paladin's Speed and mobility.

Siegbert can reclass into the Wyvern Rider line. While he will have to start at E Rank for Axes, it still has some useful skills. Strength +2 can be useful at the beginning, but loses its effectiveness down the line. Lunge can help set enemies up for a kill, but again it will likely fall off later down the line. Wyvern Rider's promotions, Wyvern Lord and Malig Knight, offer more useful skills. Wyvern Lord offers Rally Defense to help Siegbert out in a support role, and Swordbreaker to help him combat Sword users. That class also lets him use his favored Lances again. Malig Knight offers Savage Blow, a great skill to wear down surrounding enemies as well as make any enemies he can't eliminate in one attack an easier target. Trample increases his damage output when facing unmounted enemies. In the Conquest route, this skill is particularly useful due to the scarcity of opposing mounted units.

Future King
Xander's son. As a king-to-be, he received the finest education. Serious and kind. Appears in Fire Emblem Fates.

Siegbert is illustrated in the trading card game Fire Emblem Cipher with the following cards: 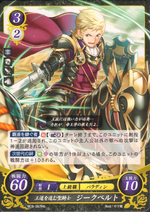 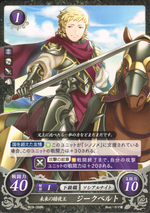 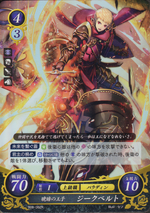 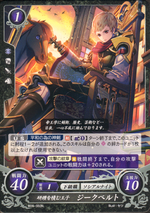 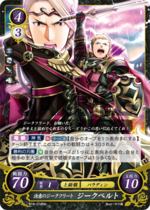 Siegbert is a German given name. Derived from the Germanic elements sigu "victory" and beraht "bright". This was the name of several Frankish kings, including the 7th-century Sigebert III of Austrasia who is regarded as a saint.