The Siegfried is a Sword that debuted in Fire Emblem Fates.

Siegfried was one of five weapons crafted by the Rainbow Sage to be used by humans in order to end the war between the First Dragons. Alongside Brynhildr, the Raijinto, and the Fujin Yumi, it is necessary in order to unlock the full power of the Yato. After the war, the blade was passed down through the Nohrian royal family. Its current known wielder is Xander, the crown prince of Nohr.

During the Heirs of Fate Xenologues, Siegbert inherits the sword and uses it as his main weapon.

Siegfried is a German-given name, composed of the Germanic elements sig, meaning "victory", and frithu, meaning "protection and peace". It is also the name of a Germanic legendary hero featured in the poem Nibelungenlied, also known as Sigurd in the Völsunga saga, who most famously appeared in the operatic cycle The Ring of the Nibelung composed by Wagner. A Valkyrie who is the queen of Iceland in that poem, Brynhildr (Brünnhilde) is the namesake of Leo's legendary tome, further adding to the allusion.

The name Siegfried belongs to a figure of Norse mythology whose parents have also had two legendary weapons named after them in the Fire Emblem series, Siegmund and Sieglinde.

Xander performing a ranged attack with the Siegfried.

In-game model of the Siegfried from Heroes. 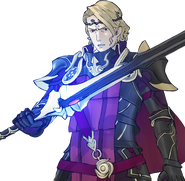