Megan Lee
[view]
“My name is Sigrun. I'm a commander of Begnion's holy guard. No word of thanks will ever repay you for saving the empress.”
—Sigrun

Sigrun is a non-playable character from Fire Emblem: Path of Radiance who is playable in Fire Emblem: Radiant Dawn. She is the commander of Begnion's Holy Guards, and serves directly underneath Apostle Sanaki, the empress of Begnion.

Sigrun first appears when she enters a battle against raven laguz during Sanaki's sea trip to meet with Elincia. During the next several chapters, she appears alongside Sanaki and gives some information to Ike. After Sanaki apologies to Reyson and Leanne for Begnion's role in the Serenes Massacre, Sigrun begins to shed tears and expresses her pride in the apostle. Later in the game, she negotiates with her old friend, Haar, to let Shiharam's men and their families take refuge in Begnion following their commander's death.

In the sequel, Radiant Dawn, Sigrun is introduced again during her search for Sanaki, who had been imprisoned by the Begnion Senate, which claimed her to be ill. She and Tanith eventually find the apostle and interrupt Valtome's execution of Zelgius following the latter's refusal to enter battle against an unarmed Elincia. During the final stages of the Laguz Alliance's war with Daein and the heroes' battles against Ashera, Sigrun remains at Sanaki's side, guarding her. After Lekain reveals that Sanaki is not the true apostle, Sigrun was able to cheer her up with reassurances of where her allegiance actually lies. She also calmly refuted Lekain’s claims regarding a false apostle not being fit to be empress by citing Begnion law, as the positions of empress and apostle are entirely different, and it only has been treated as the same because her predecessors had managed to satisfy both roles for generations.

In contrast to Tanith, Sigrun is well-loved by her subordinates, since she is kind and compassionate in nature. These traits caused her to give Marcia permission to leave the Holy Guards to search for her missing brother, Makalov. Despite being of noble birth, she does not consider the beorc race to be superior to the laguz race in any way, unlike most Begnion nobles. She is also a skilled warrior for her age, and constantly frets and worries about Sanaki's well-being.

Sigrun has very high Skill, Magic, Luck, and Resistance. Her Speed and Defense are atrocious in growth, but their high bases and promotion bonuses make this forgivable. Her Strength is mediocre, and her HP is quite low, but she is still a useful asset due to her high bases and growths. She is a great unit for 4-3, the desert chapter, and can perform as a decent escort to Micaiah and/or Sanaki in order to recruit Stefan. Tanith, Haar, and Jill also can do this if they are in the silver army. Building a support with Tanith can prove useful.

Loyal Protector
Commander of Begnion's Holy Guard, and charged with the protection of Empress Sanaki. She is kind but strong. Appears in Fire Emblem: Path of Radiance.

Steadfast Bride
Commander of Begnion's Holy Guard. Serves and supports Empress Sanaki. She heard that Sanaki had participated previously, so she came to see the festival for herself. Appears in Fire Emblem: Path of Radiance.

Sigrun was loved by her subordinates in the Holy Guard for her kindness, and guarded Sanaki all her life.

Sigrun is illustrated in the trading card game Fire Emblem Cipher with the following cards: 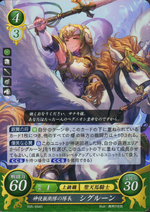 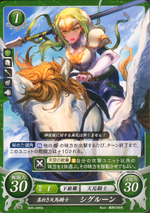 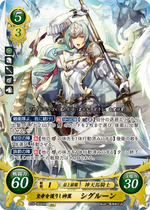 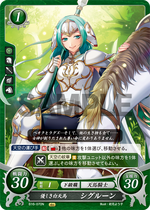 In the old Norse poems, specifically that of Helgakviða Hundingsbana I and Helgakviða Hundingsbana II, Sigrún is the name of a Valkyrie. In these poems, Sigrún was said to have fallen in love with a man who went by the name of Helgi Hundingsbane. However, as her hand had been promised to another prince, Helgi thus traversed to the prince's kingdom in order to slay both the prince and everyone else he encountered. Sigrún's brother Dagr, feeling obliged to avenge these killings, later ended Helgi's life. Sigrún then placed a curse on Dagr, causing him to lead the rest of his life like a beast in the forest before dying of sorrow. Both she and Helgi were eventually reborn, with Sigrún returning to the earth as Kara the Valkyrie and Helgi as Helgi Haddingjaskati.