Antony Del Rio
[view]
“You should know that I have no regrets about taking you outside those walls. Nothing makes me happier than helping you in whatever way I can.”
—Silas to Corrin

Silas is a playable character from Fire Emblem Fates. He is a Cavalier from Nohr and will accompany Corrin regardless of their decision.

Silas is a fledgling Knight of the Kingdom of Nohr and child of a Nohrian noble family, having known Corrin since childhood and considers them his best friend. One day, Silas decided to bring Corrin out of the Northern Fortress on a picnic. However, he was caught by the guards and was nearly executed if not for Corrin's strong opposition. Instead, he was banished from the fortress, but he never forgot his friend. Silas decided to enlist in the Nohrian army, knowing that it was the best way to meet his friend again. If Silas achieves an S-Support, he will have a daughter named Sophie. He has the unruliest hair.

In Chapter 7, Silas leads a small attack force on a Hoshidan fortress on orders of King Garon. There, he finds Corrin whom he had not seen in many years. Silas hoped that he could talk Corrin into returning to Nohr, but Corrin refused and the two met in combat. Defeated by Corrin, he states that he is ready to be executed, but Corrin refuses, wondering how the two know each other. Silas explained about their childhood together until his banishment. Corrin vaguely remembers him, but nonetheless decides to spare him and Silas decides to follow his best friend and joins the Hoshidan army, despite some wariness from Saizo.

In Chapter 12, when the plan to subdue Garon fails, Silas and the group attempt to retreat. During the escape, Xander arrives and he coldly brands Corrin a traitor and, alongside Laslow and Peri, closes in on them with the intention of slaying Corrin. Silas attempts to reason with him, but Xander refuses to listen. Fortunately, the Hoshidan army manages to escape via secret passage.

In Chapter 22, the Hoshidan army arrives at Windmire, only to find the capital void of life. As Ryoma and Corrin discuss how deserted the capital is, Silas explains to them that due to the threat of brigands and the Faceless, everyone stays inside, and the lack of resources forces Nohr into conquest. Upon hearing of this, Ryoma vows to support Nohr after the war, renewing Silas' loyalty to the crown prince.

After the war is over, Silas attends Ryoma's coronation.

In Chapter 7, Silas arrives with Elise and her retainers in order to aid Corrin in their quest to quell the Ice Tribe rebellion at the behest of Xander.

In Chapter 8, Silas and Corrin's army heads toward the Ice Tribe Village, but they are caught in a blizzard that separates them. After regaining consciousness, Corrin formally meets him and under Silas' urging, manages to keep their true intents hidden. This proves to be for naught, as Elise flounces into the room and accidentally blows their cover, forcing them to fight against the Ice Tribe.

Silas follows Corrin's plan of hoping to ending the war with less violence and casualties. As Corrin's army later makes their way towards the destination of their mission, they are greeted with the need to pass through Fort Dragonfall, a location that Silas and Elise describes to be the cadaver of a dragon which passed away years prior to the events of Fates. Silas, along with the army makes their way towards the Notre Sagesse. They find Takumi leading a sizable army to lay siege on the port of Dia. Silas and the army successfully repelled the Hoshidan army.

When Elise falls ill, Silas and the army proceed to the royal palace in Macarath to get her the medicine, but Ryoma and the Hoshidan army already seized control of the place. Ryoma, upon meeting Corrin's army at the entrance, announces that he will only turn over the medicine if Corrin returns to Hoshido. Corrin refuses his offer, and they manage to repelled Ryoma and his army, retrieving the medicine for Elise.

Silas subsequently aids Corrin's effort to put an end to the age-old conflict shared between Hoshido and Nohr.

After the war is over, Silas attends Xander's coronation.

Silas appears in Chapter 14 as the boss and joins the army at the end of the chapter. He was ordered by King Garon to kill Corrin, but when crossing blades, Silas could not bring himself to kill his best friend and Corrin notices his hesitation. After the battle, after telling their childhood story of their picnic, Corrin suddenly remembers Silas. Needing all the help they can get, Corrin asks Silas to join their cause which he accepts.

In Paralogue 5, Silas and the army are traveling with happened to be in the area to stop the bandit gang attacking town. Suddenly, he meets with his daughter Sophie, who was supposed to be in her Deeprealm. When he asks why she left her Deeprealm, Sophie plays off that her presence is merely because she heard the shouts of help through the portal to her Deeprealm, this makes Silas proud of her and asks her to join in battle, which she gladly accepts. At the end of the battle, Sophie was surprised that Avel followed her directions in battle, which Silas attributed to her more confident attitude. Silas reveals that he chose Avel for her horse because of his more demanding attitude, hoping that he would teach her to become a confident leader in the future. Proud to see how much his daughter has grown, Silas invites Sophie to come live with the army, an offer she gladly accepts.

Silas is a very easy-going and selfless young man, indiscriminately expressing a willingness to lend a helping hand to those in need. This fact can be derived across the vast majority of his supports; in his A-level support with Charlotte, for one, he insists on discussing the convoluted nature of her adolescence as a means to help her overcome the insecurities that are intrinsic to her personality. His supports with Jakob further sheds light on Silas' altruistic intentions, one that sees him revealing a stark discomfort at playing the role of confidant; when mocked for constantly seeking to aid others, Silas responds by admitting to feeling depressed when listening to their woes, owing to his inability to find the right advice to give them all the time.

Although he wants to help people better themselves, he can also be very opinionated and a surprisingly harsh critic, occasionally being insulting without intending to come across as such. His remarks about the various activities Kagero is doing in their Supports come across as vindictive (such as his comments about her art being "monstrous"), while his C Support with Hana has him technically insult her battle prowess by saying she was underwhelming and that Sakura deserves a better retainer.

He claims that his oath as a knight means more to him than anything else, even his own life. The reason he's okay with defecting is because he took that oath for Corrin's sake, so not defecting would actually have broken it more. His supports with Oboro also mention him going out of his way to save enemy civilians, and his supports with Hinoka reveal he lets enemies who surrender flee.

He is utterly devoted to Corrin above all else. He spent years working his way into the Nohrian army to become a knight in order to be reunited with them, and is willing to betray his country just to stick by their side.

Despite Silas' love for rendering assistance to the needy, he only does so out of a steadfast loyalty to Corrin; depending on the path chosen by Corrin, Silas will only be able to provide support to those who pledge allegiance to their cause.

Silas performs the role of the typical early game Cavalier unit. His growth rates are ideal for those of his class, balancing out nearly all of his stats save his Resistance and Magic which are low in growths. Though recruited a little later than most Cavaliers usually are, he starts off perfectly capable for the rest of the game. His only starting class skill is Elbow Room which makes him great for open areas that lack terrain and will later obtain Shelter (should he remain in his Cavalier class) to rescue any wayward allied unit that are in danger with his good turn movement distance. Shelter is especially useful in managing his personal skill safely.

Silas, true to his role as Corrin's childhood friend, benefits greatly off of them when they are present on the map. Should Corrin's health fall below 50%, Silas' personal skill Vow of Friendship activates, boosting his damage dealt and reducing damage taken both by 3. If using Corrin in a Guard Stance in that state, Silas can benefit not only off of the Guard Stance mechanic, but also the boost from his personal skill and Corrin's personal skill Supportive, giving him great bonuses to his damage dealt and hit rate while reducing incoming damage, all while keeping Corrin safe. Overall, Silas is a great unit for the front lines and provide decent map coverage to assist units in danger and bring them to safety while boosting himself until he drops them off.

His two promotions increases his battle capabilities. As a Paladin, he remains well rounded and is a solid choice for a basic final class. He first gains Defender further boosting his stats when using Shelter and, as mentioned above, provides more bonuses to his partnership with Corrin. Aegis is great to shave off mainly indirect damage, especially given his slight weakness to tomes. As a Great Knight, Silas trades some speed and resistance for more strength and defense. It also provides Luna for a solid attack skill and Armored Blow for less risk when initiating an attack.

Silas gains access to the Mercenary class line. This erases the movement advantage his base class provides, but it also allows him to take on foes with Beast Killers, who would ordinarily be a hard counter to him. This only really comes into play, however, in Conquest's higher difficulties. Beast Killers are virtually nonexistent otherwise, outside of My Castle battles. As a Mercenary, he gains Good Fortune and Strong Riposte. The latter of which is somewhat useful on top of Elbow Room, as it grants him even more damage. This reclass also grants him a slight boost to speed and skill, but it is generally not enough to push his speed high enough to reliably double foes without a pair-up.

The real benefits of reclassing surface once he promotes. As a Hero, he may wield Hammers after a bit of training, allowing him to deal effective damage to enemy Generals and Knights without suffering weapon triangle disadvantage. Sol and Axebreaker are both useful abilities, and the latter comes just in time to help him out against the deadly Berserkers that plague Birthright's and Conquest's later chapters. As a Bow Knight, Silas regains his mount and gains access to Shurikenbreaker, an absolutely critical ability for dealing with Conquest's Chapter 25.

Silas is illustrated in the trading card game Fire Emblem Cipher with the following cards: 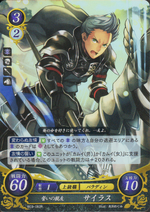 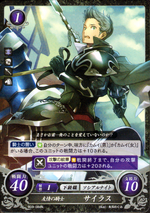 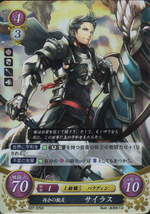 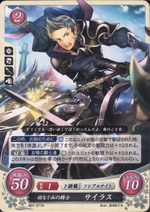 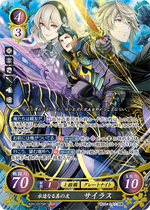 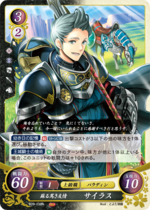 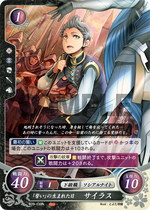 Silas is the name of a companion of Paul, an early leader of the Christian community. Silas accompanied him on his missionary journeys. This may reference to Silas' unconditional partnership with Corrin when they both set out on a mission to bring peace to both kingdoms regardless of Corrin's choice.