Bonnie Gordon
[view]
“But another mother rescued me when I was at my lowest—the Mother Mila. Now I will spend my life repaying that debt however I can. I will bring the Mother’s wisdom to the meek and lonely and save them in turn.”
—Silque

Silque is a playable character in Fire Emblem Gaiden and its remake, Fire Emblem Echoes: Shadows of Valentia.

Silque is a sweet-tempered wandering cleric in Mila's service. When Silque was young, she and her mother, a priestess of the Duma Faithful, went on a pilgrimage in Rigel. She was a sole daughter and never met her father. Suddenly one day, her mother left her in a priory in Zofia, before vanishing without a trace. She was raised as an orphan at the priory. It was Mila's temple that sheltered and saved her; thereafter, she made it her lifelong goal to share Mila’s teachings with those suffering from loneliness.

Before the start of Shadows of Valentia, Silque leaves Novis Island to deliver Mila's Turnwheel to Alm. However, she is attacked by brigands twice on the way to Ram Village; Jesse saves her the first time, but she falls unconscious during the second and is kidnapped by the thieves. When Alm hears of this, he immediately rushes to the Thieves' Hideout to rescue her. After defeating the bandits, she wakes up and tells the party who she is.

If Alm rescues her, she hands him Mila's Turnwheel and explains how it works to him. However, if Alm skips the Thieves' Hideout completely and never interacts with her, he instead receives it from a merchant at the beginning of Act 3, who informs Alm that he received it from Silque.

If Silque is not recruited into Alm's party, Celica can visit her in the same location in Act 2, revealing that the two know each other. However, Silque will not join Celica's party in spite of that. After the war, she heads to Rigel to heal the wounded.

Silque is an easygoing lady who loves chatting and gossiping. She seeks Faye's company to talk about girly things because they are among the few women in the army. Despite Faye's initial resistance to be her friend, Silque is always amiable towards her.

Her faith is what guides all her actions. When she was abandoned by her parents, she found solace in Mila, so she decided to turn a cleric aiding other people in need. She never resented her mother and is grateful that she taught her survival skills during their pilgrimage together. Her deprived upbringing with her mother and later in the priory made her develop a taste for rough food, that is considered untasteful by everyone else, like flour, hard bread and raw carrot.

Reach the end of the Thieves' Shrine on the world map. Silque will be in the last room, where you can talk with her to recruit her.

When considering the two Clerics that are obtained at the beginning of each route, Silque can be thought of as the Cleric with offense oriented support spells, while Genny plays a more traditional defensive/healing support role.

The second spell that differentiates the two Clerics is Silque's Warp spell. Warp gives Silque the ability to send adjacent units to any location on the map, allowing for a greater range of strategies and flexibility.

The third ability that differentiates the two Clerics is Genny's Physic spell, which allows Genny to heal a unit anywhere on the map. This makes keeping units alive in Celica's route easier since Genny never has to put herself in danger to heal her allies. On Alm's route, Tatiana can be recruited near the end of the game with the Physic ability already learned.

Silque's growths are well-balanced, except for her HP and Defense. Both Silque and Genny are vital to their respective parties due to the unique spells they have.

Silque is the first cleric Alm acquires in his part, joining at the Thief Shrine. Statistically she has low stats across the board with the exception of her resistance, and her joining defense and HP are among the lowest on the team, requiring protection from enemies. However, she has a very powerful spell list that she will unlock at the game progresses, making her one of the most useful members of Alm's overall team even in the later acts. Alongside the basic healing spell, Recover, she earns the Warp spell starting at level 7, which will allow her to warp allies a distance away from herself, immensely aiding in mobility. She will also learn Expel, which can banish lesser terrors from the battlefield in a large area of effect. Later in the game, she will also learn a powerful version of Invoke, which can summon illusionary Dread Fighters to fight for her.

Aside from her white magic utilities, Silque's combat is poor, as her low defenses make her an easy target for enemies, and the inaccuracy of Nosferatu makes it an unreliable for both damage and healing. Her offense improves dramatically upon promotion to Saint, where she learns the much more accurate Seraphim spell, which is effective against Terrors.

Adherent of Mila
A cleric from Novis who sought out Alm in order to deliver a certain item to him. Has a sweet but serious personality. Appears in Fire Emblem Echoes: Shadows of Valentia.

Selfless Cleric
A cleric from Novis. Appreciative of everyone's hard work day in and day out. Appears in Fire Emblem Echoes: Shadows of Valentia.

"In order to aid the injured, she headed towards Rigel."

The war left Valentia with many wounded, and Silque traveled to the former Rigel to heal all that she could. Her exact path is difficult to retrace, but anecdotes survive across the continent telling of the countless lives she saved.

Silque is illustrated in the trading card game with the following cards: 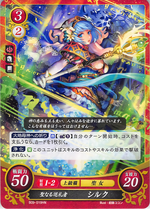 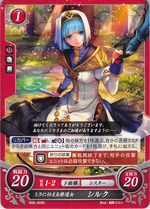 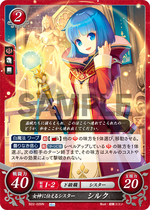