Laura Post
[view]
“I’m an orphan. This man took me in when I was real little, an’ raised me to be a dancer. But he was really mean! He would hit me when I didn’t even do anythin’. Anyway, I had enough, and I left him last year for good!”
—Silvia, revealing her past to Claud

Silvia is a playable character from Fire Emblem: Genealogy of the Holy War. She is a traveling dancer who follows Lewyn and aids the war-suffering civilians. If she is paired up, her children will be Lene and Coirpre.

Silvia is 16 years old, as revealed in the Mitsuki Oosawa manga.

As a child, Silvia was orphaned and adopted by a cruel man, who raised her to become a dancer. It is stated that her adoptive father often hit her, even when she did not do anything wrong. She eventually fled from him and met Lewyn, whom she developed a crush on.

Claud mentions that Silvia reminds him of his younger sister, who disappeared at a very young age. Alongside the fact that she possesses minor Bragi blood, this has led some to believe that the two of them are siblings. Two notable books published after the game's release suggest that they are cousins instead.

In the manga adaptation by Mitsuki Oosawa, Silvia's relationship with Lewyn is expanded on. It is revealed that during her first years as a dancer, the general populace shunned her because of her unknown origins, despite her great beauty and talent. However, Lewyn treated her with kindness and took her in as his traveling companion. Erinys expresses some envy towards Silvia's free-spirited dancer lifestyle, and to her immense surprise, Silvia bitterly refutes this view and reveals her miserable past before running away in tears.

After the fateful Battle of Belhalla, Silvia leaves her two children, Lene and Coirpre, in an orphanage located in Dahna. Her fate thereafter is not revealed and it is not made clear as to whether or not she manages to live into the time of Seliph's tale.

Silvia has a cheerful, headstrong, and friendly personality. For someone of her age, she is very flirtatious, as seen in her first conversation with Sigurd, in which she indignantly points out the size of her breasts. This can also be observed in her first conversation with Alec. Despite this, she seems to be rather insecure in matters relating to romance, particularly if she is paired up with Lewyn. In this case, she is shown to question his feelings for her in Chapter 5. Despite her flirty and merry personality, she matures through the events of the war.

Silvia fills an important role in Sigurd's army, being able to refresh any units adjacent to her (so up to 4 per turn), giving them an additional chance to act. She is not suited for combat, having poor base stats in everything other than Speed, and the worst overall growths in the entire game. Nor can she ever Promote to improve her stats. This isn't particularly noteworthy, though, as her role is entirely supportive and she should never be attacking enemy units. Arguably, since she is the equivalent of 4 of your units taking an action(your best units if you strategize well), she is actually one of the best units in the entire game in terms of value that she brings.

Silvia is only truly limited by two problems: her low durability and her low Movement. Maps in Genealogy of the Holy War are huge, and Silvia will have trouble keeping up with your strongest and fastest units in order to refresh them. It is thus highly recommended that Silvia is given the Leg Ring from Chapter 3, as it will eliminate her largest problem. However, the Leg Ring is highly contested and many players may opt to give the item to Sigurd, Erinys, their favorite foot unit, or their favorite mounted unit. Despite this, Silvia is generally considered the highest priority for the item. Similarly, the Knight Ring can improve her mobility and make her more useful.

Silvia's children, Lene and Coirpre, are a unique case in that some players actually prefer their replacements, Charlot and Laylea, owing to the fact that Charlot comes with the Elite skill and is able to receive the Berserk, while Laylea comes with the Charisma skill and is able to receive a Barrier Sword. Despite this, Silvia's children will always outshine their replacements stat-wise, even if there are some advantages to their replacements. Additionally, Silvia offers the advantage of passing down items to Lene; if she has been given the movement-boosting items like the Knight Ring and especially the Leg Ring, then it is highly recommended to pair her up with someone. Though Laylea can potentially buy these items, it will take some time as Laylea does not tend to accumulate much gold.

Silvia is best paired with either Claud, Dew or Lewyn, whereas Azelle is a safe bet. While Chulainn can pass his sword skill on to Lene and allow her to equip the Brave Sword, Lene is more a support unit and she will still be a poor overall combatant even with him as her father; on the other hand, Alec is suggested by the game mechanics as an alternate option and is able to pass down Pursuit, but Coirpre will suffer since his Magic growth won't be good enough while Chulainn or Lex are superior options if one want to improve Lene's performance at the arena. So unless it really can't be avoided, pairings outside of Claud, Dew, Lewyn, Azelle, Lex and Chulainn should generally be avoided: either they are a somewhat weak fit, pass no items to Coirpre, or the children don't benefit much from their skills since they're support units.

In Chapter 2, after Amphony Castle is captured, Alec may speak to Silvia, resulting in her gaining 100 love points with him.

In Chapter 2, after Amphony Castle is captured, Silvia may speak to Sigurd, but nothing will result of it.

In Chapter 4, before Thove Castle is captured, if neither Lewyn, Erinys, nor Silvia has a lover, position Silvia adjacent to Erinys. This will result in a conversation to be initiated, in which Silvia will gain 50 love points with Lewyn, and Erinys gaining 25 love points with him instead.

In Chapter 4, if Silvia visits a certain village up north near Thove Castle, she will trigger an event, in which she will receive the Safeguard.

In Chapter 4, after Thove Castle is captured, Silvia may speak to Claud, resulting in her gaining 100 love points with him.

In Chapter 5, after Phinora Castle is captured, if Silvia is in love with either Claud, Lewyn, or Alec, she may speak to her lover, but nothing will result of it.

Traveling Dancer
A dancer who travels the world. She looks sweet, but she doesn't necessarily act that way. Descendant of the high priest Bragi. Appears in Fire Emblem: Genealogy of the Holy War.

Silvia is illustrated in the trading card game Fire Emblem Cipher with the following cards: 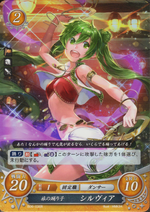 Silvia is an Italian female given name of originating from the Latin word for forest, Silva, and its meaning is spirit of the wood. The mythological god of the forest was associated with the figure of Silvanus.