Simia is one of the twelve Deadlords, and appears in Fire Emblem: Genealogy of the Holy War and Fire Emblem Awakening.

In Fire Emblem: Genealogy of the Holy War, little is mentioned about the Deadlords, but they are all fought in the Final Chapter near Belhalla and eventually defeated, including Simia herself. Simia is not fought in Fire Emblem: Thracia 776.

Simia is extremely dangerous, as she assumes the Swordmaster class. As she possesses the highest speed amongst the other Deadlords, it is thus highly recommended to use the Forseti user to kill her or Shannan since his high speed will allow him to keep up. Alternatively, the Sleep staff may be used against Simia before engaging her in battle. If all else fails, engage her in ranged combat, as her otherwise very scary 45% Adepts and 28% Criticals won't be able to trigger.

The Deadlords' names are Latin words for the animals of the Chinese zodiac. The zodiac's ninth sign is the monkey, which in Latin is simia.

Neun, Simia's Japanese name, is the German word for the number 9. 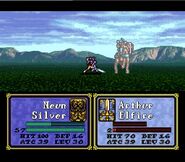 Simia killing Arthur in Genealogy of the Holy War.