Nomad
[view]
“I shall swear to Father Sky and Mother Earth.”
—Sin in The Binding Blade.

Sin is a playable character from Fire Emblem: The Binding Blade. Sin is a personal friend of the Silver Wolf's granddaughter, Sue, and aspires to be like the Silver Wolf.

A warrior of the Kutolah tribe, he followed the chief’s orders and searched all over the continent for Sue, joining a band of bandits on the Western Isles for that reason. Finding her working with the Lycian league, he became an ally.

When the war is over, Sin becomes the new leader of the Kutolah clan.

While at first glance Sin may seem to have an air of being blunt, expressionless, and apathetic to his surroundings, it does not mean he lacks normal human connections. He is always alert to danger and also a keen observer.

Description: A survivor of a Sacaen clan. Loyal to the Silver Wolf.

His starting stats and overall growths are very similar to Rath's from Fire Emblem: The Blazing Blade. In contrast to Sue, Sin sacrifices some skill, speed and luck and is thus not as evasive. However, his evasion is still above average and his speed and skill may max out anyway. His high HP allows him to take a couple more hits than his female counterpart, and he can take out enemies in one turn thanks to his strength, which maxes out on average. His higher constitution also allows him to wield heavier bows (and some swords, if promoted) without a major speed reduction, if any, but not high enough where it kills his ability to use the rescue command well. His Ice affinity gives hit and evasive bonuses, but due to his reduced set of support options, or his possible supports being highly evasive and accurate units already (for instance, his fellow Sacaeans Fir and Sue), the bonuses in question will be more beneficial to himself. On the other hand, the player can choose to support him with Dorothy or Zeiss to improve their accuracy and durability. Sin is considered by many to be the best bow user in Binding Blade due to having strong growths and bases, especially on Hard Mode where his bonuses help him a lot. One of his weaknesses however is that training him too much greater than Shanna and Thea can lead to the Sacae route in chapters 17-20 which is often regarded as being much harder than the Ilia route. But that can be countered when Sue is not used and both Pegasus knights have grinded experience points. He especially becomes useful in the Ilia route and chapters 21 and 23 that are otherwise swarming with enemy Wyvern Riders and Wyvern Lords.

Overall, Sin requires investment and especially compared to various repromoted Bow users, but should not disappoint in the long run if taken time and effort to train. And can become one of the most powerful units in the game for clearing out enemy flying units via far surpassing the likes of Klein, Igrene, and Dayan in the end.

“"We've finally made it...”
—Sin's quote in the final chapter of "The Binding Blade"

Sin - Falcon of Sacae (サカの隼 Saka no hayabusa)
"After returning to Sacae, Sin joined the newly reunited Kutolah clan. He never had much to say, but with his leadership and skill with the bow, he spread his name across the vast plains as the new Silver Wolf."

Sin is illustrated in the trading card game Fire Emblem Cipher with the following cards: 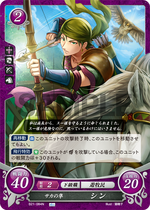 Shin is a Japanese name meaning new or deep. Fitting since he becomes the new Silver Wolf.

Artwork of Sin in Fire Emblem 0 (Cipher) by Nekobayashi.

Sin as a Nomad in Fire Emblem 0 (Cipher).

Sin's portrait in The Binding Blade.

Sin as a Nomad in The Binding Blade.

Sin as an Enemy in The Binding Blade.