∞
[view]
“A magic bow from the Outrealm. Projects a simulacrum of the wielder.”
—In-game description from Fates.

Skadi (スカディ Sukadi) is a unique Bow that debuts in Fire Emblem Fates. It is a magic bow from the Outrealm wielded by the possessed Takumi in the Endgame of Conquest and in Heirs of Fate End: Lost in the Waves. Being a Yumi, it raises its wielder's Resistance by 2.

The weapon's flavor text describes a unique effect of automatically creating a replica of the user, as though they had used the Mechanist's Replicate skill, but the bow itself has no such effect programmed in actual gameplay, but a similar effect can happen if the Sniper has the Replicate skill on them at the time.

In Heirs of Fate: End, the bow is weakened and has a normal range of 2.

In Norse mythology, Skaði (sometimes anglicized as Skadi) is a giantess and goddess associated with bowhunting, skiing, winter and mountains. 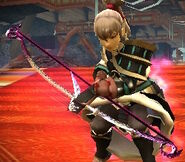