James A. Parker
[view]
“Do not mock me, beorc boy. Why should I bother with plans? No soldier would cower behind stone walls after being challenged to a battle! We will issue a challenge, and they will meet it. We have no need for plans!”
—Skirmir in Part 3 Chapter 1: Laguz and Beorc

Skrimir is a playable character in Fire Emblem: Radiant Dawn. He is the nephew of Gallia's King Caineghis. He commands the Laguz Alliance in the war with Begnion.

Prior to the events of Radiant Dawn, Skrimir was named Caineghis's successor, and forbidden from partaking in the Mad King’s War due to his penchant for reckless bloodlust and inability to resolve even domestic affairs.

According to Ranulf, his second-in-command, Skrimir's actions in the Laguz-Begnion War will prove his ability to lead his people. To Ranulf's unending annoyance, he is an extremely impulsive and fiery commander who cares nothing for strategy. Despite this, over the course of Radiant Dawn he begins to hold Soren's strategic mind in high regard. At one point, he even invites Soren to sit beside him at a meeting (which Soren bluntly declines).

His recklessness is taken advantage of by Begnion's General Zelgius, who challenges the Gallian commander to a duel: Skrimir suffers a humiliating defeat. The loss deals a great blow to Skrimir's pride, and he is forced to subdue his impulsiveness. A somewhat-wiser, more becalmed Skrimir then leads the Laguz Alliance back to Gallia; he later accompanies Micaiah's Silver Army to Begnion.

Caineghis abdicates after the war, and Skrimir ascends to the throne of Gallia, with Ranulf as his right hand man, but only if he does not have an A support with Ike.

Though Soren (and some others) frequently point out his flaws, Skrimir is generally loved by and has the support of his subjects for his courage and tendency to not worry about the small things. After suffering an injury from his fight with Zelgius, he painfully learned the shock of defeat and the value of tact, personally apologizing to Ranulf for his blunders, showing signs of personal growth.

Skrimir is an extremely powerful unit, especially in the beginning of Part 3, where he is an Other Unit, as most enemies at that point are fairly weak. Skrimir joins rather late in the game, but can still hold his own if one chooses to use him in the Tower of Guidance. In the Tower, it would be a wise decision to have Skrimir use the Laguz Gem, as other Laguz units you are likely to bring will be the Royal Laguz, who can transform at will anyway, or Giffca, who comes with his own Laguz Gem.

Part 4 Prologue
Skrimir: Ugh... Wounds are nothing compared to the shame of defeat...
Micaiah: General Skrimir! Please fall back. You mustn't throw your life away... Think of those who'd mourn you if you were to die!

Skrimir, as the new lion king, patrolled Gallia's borders vigorously, and his large heart won the love of his people.

Skrimir is illustrated in the trading card game Fire Emblem Cipher with the following cards: 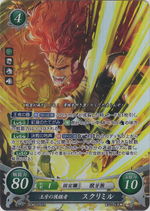 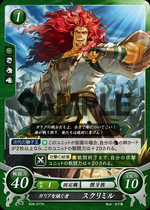 Skrimir is a variant of Skrýmir, an Utgardian giant from Norse Mythology, the glove of which Thor, Loki, Þjálfi, and Röskva sleep in during their travels in the Prose Edda book, Gylfaginning. After a few unsuccessful attempts by Thor to kill the giant, Skrýmir advises them to turn back from going to Utgard-Loki's castle, takes up his knapsack, then leaves into the forest.

From Nordic name elements, Skrýmir means "big-looking"; while Gallian Skrimir is certainly large, he is actually the shortest of the beefier male laguz (all tigers, lions, Tibarn, Dheginsea, and Gareth), going by character portrait height.