Slayer is a skill that debuted in Fire Emblem Gaiden, though it wouldn't be properly named until TearRing Saga: Utna Heroes Saga and Fire Emblem: The Sacred Stones.

In Gaiden, when a Falcon Knight attacks a monster unit, a small circle of angels will encircle their lances during the attack animation (similar to that of the Seraphim spell), and their base damage will be tripled.

In Sacred Stones, the Slayer skill is a class-specific skill, and is learned when a unit is promoted into a Bishop. This skill essentially makes all spells cast by Bishops effective against monster units. As an example, consider the case of a Bishop casting a Shine spell, which has a might value of 6, against a Revenant. Normally, this attack might deal 22 points of damage. However, with the Slayer skill in effect, the spell's might is tripled to 18, dealing a total of 34 points of damage.

In Shadows of Valentia, Falcon Knights possess the class skill Banish (退魔, lit. Banish Demons), which adds a flat 10 points of Might to attacks against Terrors. Meanwhile, weapons such as the Blessed Sword grant Anti-Terrors, which functions identically to previous iterations.

In TearRing Saga: Utna Heroes Saga, the skill is known as Anti-Evil. 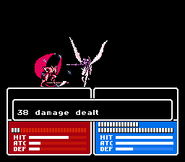