Sleep is a Staff that debuted in Fire Emblem: Genealogy of the Holy War.

The Sleep Staff is a recurring staff in the Fire Emblem Series. When cast, this staff allows its user to send a selected enemy unit to Sleep, rendering them immobile and vulnerable to hostile attacks. This staff is most commonly wielded by enemies during the middle and later chapters across all games. Although the Sleep Staff is inaccurate, this is offset by its long range, allowing for it to be used at a safe distance.

Although the Sleep Staff can technically be wielded by any staff-wielding class, it is more effective in the hands of a character with high Magic. This is because the staff's Range is determined by its user's Magic.

The Sleep Staff as it appears in the first series of the TCG.

Edain sending an enemy General to Sleep in Genealogy of the Holy War. 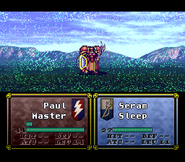 An enemy Priest sending Geese to Sleep in The Binding Blade.

An enemy Bishop sending Jill to Sleep in Path of Radiance.