View source
“This hulking structure blocks the end of the deep valley dividing the continents. The sluice gate controls the water's flow into rivers and out to sea.”
—Description in Fire Emblem Echoes: Shadows of Valentia.

The Sluice Gate is a location in Fire Emblem Gaiden and its remake. It is located in the top left-side of Zofia and it appeared at the end on Chapter 3 in Alm's route. The boss of the Sluice Gate in Chapter 3 is Tatarrah, along with a brainwashed Delthea.

According to the Sluice Keeper, it was built roughly one hundred years prior to the events of the game.

In Memory Prism #4, it is revealed that the Sluice Gate was where Emperor Rudolf entrusted Mycen with his son, Alm. 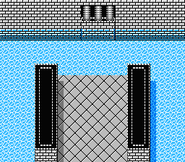