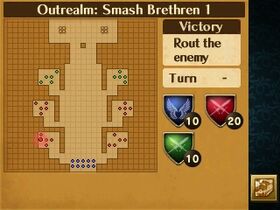 Chapter script
[view]
“The red-haired lion, Roy—Elibe's young hero. The Hero of the Blue Flames, Ike—Tellius's infamous mercenary. These two heroes' armies are locked in a never-ending war in the Outrealm. Chrom decides to lend a hand to Roy to defeat Ike's army.”
—Opening Narration

Smash Brethren 1 (Red vs. Blue (Seals Side) in the Japanese version) is Xenologue 7 of Fire Emblem Awakening. This chapter takes place in the Outrealm: The Dragon's Gate.

Chrom joins forces with 10 Elibe NPCs (led by Roy) to defeat 20 Tellius enemies (led by Micaiah). The battle map is modelled after the Final Chapter: Light of Fire Emblem: The Blazing Blade. After completion of the mission, Elincia will join as a Level 6 Falcon Knight.

This Xenologue, (like all Fire Emblem Awakening Xenologues) is only available as DLC from the Nintendo eShop. It can be purchased separately for $2.50 or as part of the Smash Brethren DLC pack for $6.50 (which also includes Smash Brethren 2 and Smash Brethren 3). The overall pack has 105 blocks.

As for this map specifically, it has 34 blocks and has a difficulty rating of three stars. It costs $3.00 by itself. The map was released March 14th, 2013. Rewards: Elincia Card. This is the information that shows up on the DLC shop in the game itself. The description reads, "Help Roy's forces defeat Ike's army! Rewards: Elincia card."