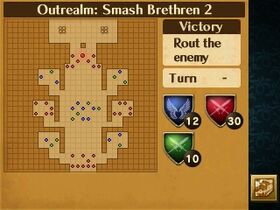 Chapter script
[view]
“The red-haired lion, Roy--Elibe's young hero. The Hero of the Blue Flames, Ike--Tellius's infamous mercenary. These two heroes' armies are locked in a never-ending war in the Outrealm. Chrom decides to lend a hand to Ike to defeat Roy's army.”
—Opening Narration

Smash Brethren 2 (Red vs. Blue (Radiance Side) in the Japanese version) is Xenologue 8 of Fire Emblem Awakening. This chapter takes place in the Outrealm: The Dragon's Gate.

This Xenologue is only available as DLC from the Nintendo eShop. It can be purchased separately for $2.50, or as part of the Smash Brethren DLC pack for $6.50 (which also includes Smash Brethren 1 and Smash Brethren 3.)

By Elincia's request, Chrom faces off against 30 Elibe and Magvel enemies (led by Roy), with the help of 10 Tellius NPCs. The enemies are all promoted and Level 3-10.

The battle map is modelled after the Final Chapter: Light of Fire Emblem: The Blazing Blade. After completion of the map, Eirika joins as a Level 23 Bride and the player will receive a Wedding Bouquet.

The map music that plays here is a briefened version of "Distant Roads" from Fire Emblem: The Sacred Stones's soundtrack.