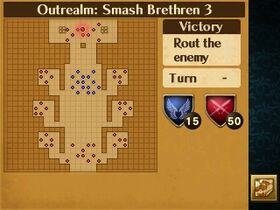 Chapter script
[view]
“The red-haired lion, Roy—Elibe's young hero. The Hero of the Blue Flames, Ike—Tellius's infamous mercenary. These two heroes' armies are locked in a never-ending war in the Outrealm. In order to seal away these magical talismans, Chrom challenges them to an all-out war.”
—Opening Narration

Smash Brethren 3 (Red vs. Blue (Decisive Battle) in the Japanese version) is Xenologue 9 of Fire Emblem Awakening. This chapter takes place in the Outrealm: The Dragon's Gate.

Chrom faces off against 50 of Elibe, Magvel, and Tellius's elite warriors, led by the mightiest hero of them all: Ike. The enemies are all promoted and Level 3-10. The battle map is modeled after the Final Chapter: Light of Fire Emblem: The Blazing Blade. After completion of the map, Lyn joins as a Level 8 Swordmaster and the player will receive an Iote's Shield.

This Xenologue is only available as DLC from the Nintendo eShop. It can be purchased separately for $2.50, or as part of the Smash Brethren DLC pack for $6.50 (which also includes Smash Brethren 1 and Smash Brethren 2).

This map has a difficulty of four stars.

Players start out in the middle of the map, similar to how players began in Light. However, the doors do not open at the beginning of the player's phase and they will have to deal with a Sniper, Trickster, Falcon Knight, 2 Swordmasters, and 3 Generals and Sages. Most of the enemies are easy to deal with, but Jaffar should be attacked from a fair distance as he is a level 9 Assassin who comes with the Lethality skill, and can cause an unnecessary causality if his skill activates.

There are two event tiles in the mid-western and south-eastern rooms in the north-west and north-east corners respectively.

A special conversation will trigger if the these playable units talk to these Champion units.

“Roy and Ike join forces to form an overwhelming combination of military might. In order to seal away these summoned einherjar, Chrom must challenge them to an all-out war.”
—Website Opening Narration
“Defeat both Roy's and Ike's forces!”
—North America eShop Opening Narration