N/A: Likely Lion
[view]
Soan is mentioned as one of Ashera's Three Heroes in Fire Emblem: Radiant Dawn, Soan is likely one of the first members of the lion tribe. After saving the world from destruction by Yune and successfully sealing her within Lehran's Medallion, Soan became the second King of Begnion, after Altina (although due to a mistranslation, the English version of Radiant Dawn claims that he was the second king of Gallia instead).

He is also a direct ancestor of the Branded swordsman, Stefan.

Soan is illustrated in the trading card game Fire Emblem Cipher with the following cards: 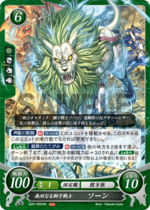 Soan as a Beast Tribe in Fire Emblem 0 (Cipher). 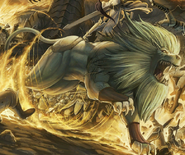