Varies
[view]
“A spirit-inhabited sword, the partner of the Mani Katti. This is the Sol Katti. It’s not a legendary item, but its blade contains much power.”
—Athos bequeathing the Sol Katti to Lyn in Light.

The Sol Katti is a Sword that debuted in Fire Emblem: The Blazing Blade.

The Sol Katti is first introduced in the interim before the start of the Final Chapter of The Blazing Blade, where Athos bequeathes the Sol Katti to Lyndis shortly before the final battle against Nergal and his Morph constructs. While doing so, he asserts that the Sol Katti is not a legendary weapon, but is imbued with tremendous power nonetheless.

The Sol Katti is the stronger sister sword of the Mani Katti, boasting stats surpassing it across the board. Also, unlike its twin, the Sol Katti is effective against Dragons, both Manaketes and Wyverns, and has substantial Might to rival the power of the Legendary Weapons of Elibe. However, it is significantly heavier than the Mani Katti, being 4 times as heavy. The Sol Katti can only be wielded by Lyndis in The Blazing Blade.

The Awakening incarnation of the Sol Katti has lower Might and the removal of its effectiveness against dragons, but is given a much higher Hit Rate and Critical Rate. The Sol Katti in Awakening can only be wielded by Myrmidons and Swordmasters.

The sword returns as the personal weapon of Lyndis in the spin-off title Warriors. In this game, its appearance has been revamped; in this incarnation, the blade resembles a broadsword, resembling Marth's Exalted Falchion, with the crossguard looking like a red dragon in flight. As a weapon with six available slots, Sol Katti allows an amount of flexibility with what weapon attributes to forge into the sword. However, with a natural Dracoslayer slot for its seventh slot, it forces players to forge only one foreign slayer-type weapon attribute to the sword. As it is a personal weapon, it can be upgraded by creating Mastery and Sanctuary Crests, drastically increasing the weapon's Might, as well as it being unable to be used for selling or as reforging fodder.

*Myrmidons and Swordmasters only.

The name "Sol" could have two meanings. One interpretation is that sol is the Spanish, Portuguese, and Latin word for "sun". Sol is also the personification of the sun in Old Norse mythology, although her name is spelled as "Sól"; Sól and her brother Máni are killed and eaten by a pair of wolves named Sköll and Hati during the events of Ragnarök.

"Katti" is possibly derived from the Hindi word kaatna, "to cut." 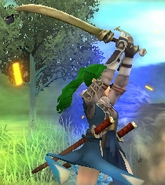 In-game sprite of the Sol Katti from Heroes. 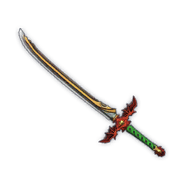 In-game model of the Sol Katti from Warriors.