Shove
Defense +2(FE16 only)
Reposition(FE16 only)
[view]
The Soldier (ソルジャー Sorujā) is a combat physical class that, for the most part of the Fire Emblem series' history, is unplayable and un-promotable. Wielding Lances as their sole weapon of choice, Soldiers usually boast remarkably subpar stats (aside from their HP, which ranges from average to above average) when compared to other units at the same level. They are a fully playable class only in Fire Emblem Gaiden and its remake, as well as the Tellius series and Three Houses.

Soldiers first appear in Gaiden as the first-tier class of the Knight/Baron path, Lukas being the first soldier to show up in the entire series. As part of the Armored line, Soldiers have similar movement as Knights, as well as the highest Defense and Strength out of the first-tier classes.

Soldiers first show up as enemy-only units in Mystery of the Emblem. Soldiers usually replace Cavaliers and Paladins in the indoor chapters of Book 1. In this title, Soldiers are not as statistically poor as they will be in later games, some of whom encountered in the later chapters and the arena being quite powerful. Curiously, Soldiers have a player palette and there is even a set of opponents for a playable Soldier to fight in the arena, unlike most other unplayable classes.

Soldiers are an unused class with several weapon variations (normal, spear, axe, and sword) in Genealogy of the Holy War. This role appears to have been taken by Armor Knights in the finished game.

Soldiers first appear as weak enemy-only fodder in Thracia 776. Soldiers have been revamped in such a way that their stats are much lower as compared to any other class. They are also classified as a tier-0 unit, boast a movement range that mirrors that of Armored units, and award less experience than other units. Possibly due to these reasons, Soldiers are one of the only classes not to show up in the Arena.

In TearRing Saga: Utna Heroes Saga, the Soldier appears as an enemy-only class. The enemy-only Lancer appears to be a mounted Soldier, and Soldiers may be considered to be their dismounted form. There is also another foot class present that is called the Spear Knight, one that boasts many similarities to the Soldier class, in particular the unused incarnation from Genealogy of the Holy War. The Spear Knight promotes into a Sergeant, a class blessed with the ability to wield all melee weapon types. The Dismounted form of the playable Dark Knight class is known as Dark Soldier, wields Lances exclusively, and can use Devil Spears with no chance of backfires.

Enemy and NPC-exclusive Soldiers based off their Thracia 776 incarnation appear in all three GBA games, though with higher movement. In The Sacred Stones, the class of the playable character Amelia, Recruit, appears to be a personalized variant of the Soldier class. It has similar characteristics, traits, and nearly identical base stats to the classic Soldier class. The connection is also suggested by the Japanese name, Trainee Soldier.

In Path of Radiance and Radiant Dawn, Soldiers are a playable class for the first time since Gaiden and will promote into Halberdiers once the necessary requirements are met. In the latter title, a Soldier ( Sorujā) can further promote into Sentinel after promoting into Halberdier.

In the DS remake of the first game, Shadow Dragon, Soldiers appear exclusively in the prologue chapters for Normal mode, where they act as weak enemy units that are slightly more dangerous then the enemy Fighter units.

In the DS remake of Mystery of the Emblem, New Mystery of the Emblem, Soldiers appear yet again, where they are notably less important as compared to their original SNES incarnation; they no longer appear in the arena, and the Soldier enemies in later chapters are replaced by other classes such as Warriors and Paladins.

Soldiers are one of few common classes that are unplayable in Awakening. While Ephraim appears as an enemy Soldier in two DLC maps, his playable incarnation takes the form of a Great Knight. Nephenee, on the other hand, oddly appears as an Einherjar General instead of a Soldier. Interestingly enough, concept artwork for female Soldiers have been released for this title, and they only appear in-game in cutscenes.

In Fates, the Soldier class is split into the Nohrian class, Lancer (ランサー Ransā), and their Hoshidan equivalent, the Spear Fighter (槍術士 Sōjutsushi). The Spear Fighter is heavily based on the Soldier class from the Tellius games and promotes into the Spear Master class, which similarly takes after the Halberdier class. The Lancer class cannot be accessed by any regular character, although the player army can recruit playable Lancers by capturing and thereafter persuading them. The Lancer class has no promotions and boasts stats that are superior to those of a standard first-tier class. However, they still retain the first-tier rank lock (B rank) and their stats are lower than that of a second-tier class. Despite having no promotions, Lancers tend to have a wide variety of skills from other classes depending on their level. These include Lunge, Strength +2, Defense +2, Elbow Room, Natural Cover, Underdog, Wary Fighter and Lancefaire.

The class also features in the spin-off title Fire Emblem Warriors, however the class is technically an enemy-only class and are a moveset clone of Oboro, a Spear Fighter. Soldiers who fly under the Hoshidan flag are referred to as Spear Fighters.

In Three Houses, the Soldier returns as an optional promoted class of the Commoner and Noble class if the unit passes the Certification Exam at Lv. 5 with a Lance Skill Level of D or higher and a Beginner Seal.

In Vestaria Saga I, the Soldier is an enemy-only class. They wield Lances and Throwing Spears. Unlike other titles, Soldiers are significantly more dangerous due to having decent stats and being able to wield more than one weapon type.

Since Mystery of the Emblem, Soldiers have had distinctive uniforms and helmets as well as a small, circular shield on their left arm. Typically, Soldiers wear light armor with helmets that cover their eyes. Since The Binding Blade, the color of the uniform will reflect the nation or alignment of the soldier.

In Gaiden, and Mystery Soldier armor has as roman theme consisting of a chainmail vest with a kilt, a helmet with a slit for the eyes, and sandals. In Gaiden, enemy soldiers wore a variation with spiked shoulderpads and a helmet resembling a human skull. In Mystery, the soldiers uniform was shared with Archers and Ballisticians, the latter of whom would share their uniform with soldiers in the majority of their appearances.

Ballisticians and Archers often use similar, or even identical uniforms to the Soldier class. Generic units of various classes such as Sniper, Cavalier, and Knight will typically use a speaking portrait based on Soldiers. This is even true in games where Soldiers do not appear, one such example being Genealogy of the Holy War.

In Awakening and Fates, Soldiers now resemble 16th century pikemen and appear with less armor than in previous titles, as their uniform now consists of a back and breastplate with a pair of cuisses attached, shin guards, a scarf that covers their neck and face and Morion helmets.

Artwork of soldiers in Fire Emblem Echoes: Shadows of Valentia.

Concept artwork of the Soldier class from Path of Radiance.

Concept artwork of the Soldier class from Radiant Dawn. 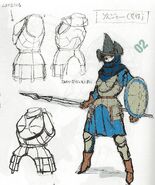 Concept art of a male Soldier from Fates 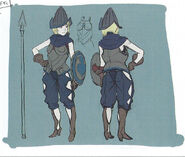 Unused Concept art for a female Soldier from Fates.

Concept artwork of the Soldier class from Echoes: Shadows of Valentia.

A Soldier as it appears in the TCG.

Generic CG portrait of the Solider class from the GBA games.

Generic CG portrait of the Soldier class from Fire Emblem: New Mystery of the Emblem. 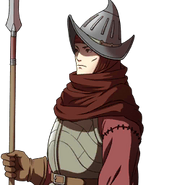 Generic portrait of the Soldier class from Fire Emblem Awakening. 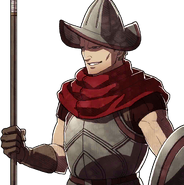 Generic class portrait of a Lancer from Fates. 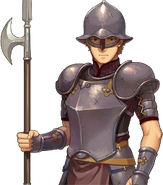 Generic class portrait of a Soldier from Echoes: Shadows of Valentia.

Battle model of the Soldier class from Gaiden.

Battle model of Nephenee, a female Soldier from Path of Radiance. 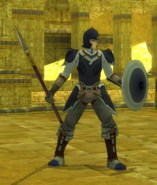 Battle model of Aran, a Soldier from Radiant Dawn. 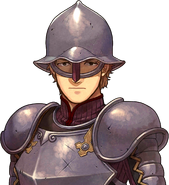 A Soldier from Fire Emblem Echoes: Shadows of Valentia.

Battle model of an enemy generic Soldier from Echoes: Shadows of Valentia. 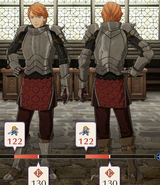 Battle model of a soldier from Fire Emblem: Three Houses.

Dimitri as a soldier in Fire Emblem: Three Houses.

Map sprite of the Soldier class from Fire Emblem Gaiden.

Map sprite of the Soldier class from Fire Emblem: Mystery of the Emblem.

Map sprite of the Soldier class from the GBA titles.

Map model of the female Soldier class from Fire Emblem: Path of Radiance.

Map sprite of the Soldier class from Fire Emblem Awakening.