Amber Hood (Fates)
Michelle Ruff (Heroes)
[view]
“Come on! Turn that frown upside down. Know what you have then? A smile! That's what my father taught me.”
—Soleil in her Paralogue.

Soleil is a playable character in Fire Emblem Fates.

Soleil is the daughter of Laslow and thus Olivia's granddaughter. She can also be the sister of the Male Kana or Shigure if Laslow achieves a S-Support with the Female Corrin or Azura. Like the other children of Fates, she was placed in the Deeprealms to protect her from the war. While she stayed in her Deeprealm for most of the time, she eventually became interested in mercenary work and amassed a large crew who help out those in need. It is said that her group is always smiling due to her philosophy of keeping a positive attitude.

In her Paralogue, Soleil and her group of mercenaries arrive in the normal world and are helping to fend off bandits from a local town. However, after fending off the latest bandit attack, the bandits return with a large force out to exact revenge. As luck would have it, Laslow is nearby after receiving reports of the bandit attacks. Silas informs him that the bandits are attacking the town and overhears that Soleil is among the town watch repelling the bandits. Without a moment to spare, Laslow charges into battle without a second thought and eventually reaches her. Soleil tries her best to keep a positive attitude in front of her father, but ultimately her facade crumbles as she admits that she was scared. Laslow calms her down, telling her it is okay not to smile. However, he recommends that she laugh if she cannot smile, as it can throw off her opponents. After routing the bandits, Soleil has a heart-to-heart with her father. Silas notes that her pep could help with morale in the otherwise grim army. Thrilled by the idea of being with her father, Soleil begs him to take her. After much consideration, Laslow agrees. Suddenly, a village maiden comes to Soleil to thank her for fending off the bandits by giving her a gift. However, Soleil pauses, enamored by the village maiden and invites her to go stargazing together, which she accepts. Laslow is amazed by his daughter's smoothness. Later in her supports with her father, she is shown to have a very strong bond with him and likewise. She acts more down to earth and comfortable in these conversations, when compared with the rest of her supports.

Generally exuding a cheerful and energetic personality, Soleil is an optimistic young girl with a penchant for flirting with cute girls. Unlike her father, Soleil is shown to be very popular with girls and is successful most of the time. Also, unlike the rest of her family, she has no issue with people looking at her and in fact tends to be immensely shameless, as she does not mind changing clothes with other people (even of the opposite sex) watching. However, Soleil seems to have problems when it comes to respecting personal space, resulting in her chasing Ophelia halfway across camp in her support with her, and reacting in an inappropriate manner when Ophelia casts a spell so the two exchange bodies. Although good intentioned, sometimes Soleil comes off a bit strong and ends up having to make amends for it later.

Still, she isn't completely without embarrassment; in some of her other supports she tries to practice singing and dancing in secret, and gets vexed whenever she's caught doing so. Also, her supports with male Corrin have him try to help her to not sweat or faint around girls, as she thinks that it's getting in her way of being a warrior, by practicing blindfolded and pretending that he's a girl.

Laslow states that Soleil has "good taste" in both men and women. Her roster also stating the fact. In the English localized version of the game, Soleil's support conversations and personality suggest that she prefers females instead. In most of her supports with the other male second-gen, if they reach an S rank support, they simply become better friends rather than marrying. The only exceptions to this are Forrest and the male Corrin. In the Japanese original version however, while Soleil still has a weakness towards some females, it is much more ambiguous which one she prefers, and her S rank supports have her normally marry the other male children.

Despite coming from a talented family, Soleil did not inherit talent for the arts, with Dwyer misinterpreting her dancing as a demon-summoning ritual, Mitama being vexed by Soleil’s poetry, and as seen in her supports with Shigure and the roster, her being the worst singer in the army. Contrary to her grandmother having the best voice in the army, and her father being able to sing (as is revealed in his support with Camilla). She is however, shown to have some ability when it comes to making sweets, as shown in her supports with Asugi. Nevertheless, she adores her father and loves being protected by him. Growing up alone in the Deeprealms caused Soleil to become very protective of Laslow, stating that she always was unsure when he would be seen again, and that she didn’t want to lose him. She thinks that her mother is very cute, and is seen showering her mother with compliments in their support. Unfortunately, this makes her a mild annoyance to her mother, as she tries to work through the excessively complimenting ways of her daughter.

*Soleil will receive whatever secondary class that Corrin has access to if she has achieved an S-Support with him.

Soleil inherits Laslow's base stats. She has excellent strength base growth and has a good Skill modifier to plant her firmly in her Mercenary base class. For all of her mothers, her Skill never has a negative modifier and Strength is mostly positive except for Felicia who causes her to have no Strength boost. She does carry a weakness in Defense as most mothers cause her to have negative modifiers, making her ill suited to tank hits. She works great in tandem with female units thanks to her Personal Skill, Sisterhood, which increases her damage dealt and damaged received by two when she is the lead unit with a female support. To maximize this effect, having her partnered with Sophie, Ophelia, Nina, Mitama, a Female Corrin, or her mother with an A-Support gives her the most benefits. Overall, she can make for a good frontline unit or for unit clean up, but should be cautions around swarms of physical units.

From the Mercenary class, Soleil gains Good Fortune and Strong Riposte. Soleil has average luck growth, making Good Fortune a useful early healing skill for her although more reliable methods of healing are made available as she levels up. Her weak defense growth makes her a poor candidate for being a frontline counterattacking unit, so she may see limited use from Strong Riposte.

Adorable Adorer
Laslow's daughter. Cheerful and not even slightly shy. Looks up to cool women. Appears in Fire Emblem Fates

Soleil is illustrated in the trading card game Fire Emblem Cipher with the following cards: 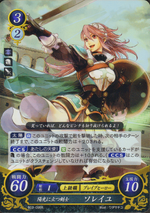 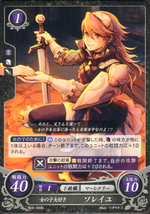 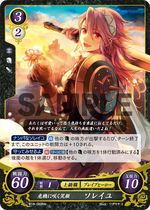 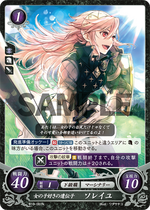