View source
watch 48:54
'Fire Emblem: Path of Radiance' - Chapter 22
Do you like this video?
Play Sound 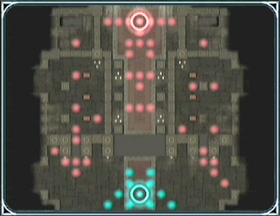 Chapter script
[view]
“Overcoming many hardships, Ike and company finally arrive in the Daein capital of Nevassa. However, much to their dismay, King Ashnard is nowhere to be found. According to intelligence reports, the king is in Crimea's capital of Melior, preparing to wage war against Gallia. In addition, at least half of the Daein army, including its most elite forces, remain unharmed and at his side. The Crimean army is again forced to march. This time, however, the battlefield will be their own homeland. Eagerly awaiting their arrival is a Daein army more powerful than anything they have faced so far. This fact, coupled with Nasir's act of betrayal, has filled Ike with apprehension and disappointment. Yet, it is then, when all hope seems faint, that unexpected good news arrives.”
—Opening Narration

Solo is Chapter 22 of Fire Emblem: Path of Radiance.

This chapter has many priests who you want to avoid killing if you want Bonus Experience or the Ashera Staff. When choosing units you should have at least 3 or more units that have high enough constitution to be able to shove the priests out of the way. You should also bring a thief and chest keys with you if you want all of the items in the chests. When you start, split your units into 3 teams. Two of the teams will take care of the enemies on the side and go up to get the chests. The middle team will attack enemies in the middle. Be careful to not allow your units to counterattack the priests as some of them have Light magic and will attack you if you are in range. The priests are very weak and will probably die if counterattacked. They will also not move so you must shove them around to create an opening for your units. While you are looting the chests reinforcements will come from the left and right side. Take care of them while your thief(s) loot the chests. The boss of this chapter Schaeffer uses a Killer Axe and a Killer Bow. If your thief is near him, you can steal one of his weapons. He drops the Killer Bow on death, so if you want both items you can make him equip his bow so you can steal his axe. This is not recommended as he may get a critical hit as well as his skill Colossus allows him to deal more damage to units if they have a lower constitution.

The Ashera Staff fully heals all allies and cures all status aliments. Rank:S 3/3