Chapter 1: Three Houses (As Tomas)
Chapter 8: The Flame in the Darkness (As himself)

Chapter 8: The Flame in the Darkness

Joe Ochman
[view]
“That's right. He called us beasts. Meanwhile, he refers to himself as "the Savior." Who exactly is he saving?”
—Ignatz

Solon, the self-titled "savior of all," is a minor antagonist from Fire Emblem: Three Houses. He is a member of the Those Who Slither in the Dark with the look of a mage. Suitable for his appearance, he uses cunning schemes and tricks. He is a highly dangerous individual and considers himself a savior.

Solon had infiltrated the Garreg Mach Monastery under the guise of Tomas, pretending to be a faithful follower of the Church of Seiros. Tomas was the Monastery's librarian for over 40 years. Sometime after he had retired from his job, Solon killed him and assumed his identity to infiltrate the Monastery.

Using his position, he was able to learn much from the books stored in the library and has intimate knowledge of the Monastery's affairs. His identity is revealed after controlling the denizens of Remire Village.

Kronya, taking the disguise of Monica, lures Byleth and their students to Sealed Forest with the intention of killing them. Much to Kronya's surprise, however, they are able to defeat her forces, and she attempts to flee as Byleth chases after her. Before Byleth can kill Kronya, Solon appears behind her, with Kronya interpreting his presence as a rescue. Instead of a rescue, Solon plunges his arm into Kronya's chest and rips her heart out, using her lifeforce to cast the Forbidden Spell of Zahras on Byleth, sending them into the void. Byleth's students then arrive, and Solon taunts them, claiming that he has removed Byleth from the world.

Much to his surprise, however, Byleth escapes the void. Solon, knowing that nothing could escape the void, then realizes that Sothis must have granted them her power to escape. He calls in a group of Agarthans and Demonic Beasts to finish them off, but he is eventually killed in the ensuing battle, stating that Thales will continue their mission.

As an Enemy[edit | edit source]

Enemy Deal 1 or No Damage or Misses[edit | edit source]

Solon appears during the reveal trailer "The Ashen Demon" for Byleth's inclusion into Super Smash Bros. Ultimate, fulfilling a similar role to his in-game appearance in Three Houses.

Solon is an Athenian legislator and poet who is often credited with laying the foundations for Athenian democracy. He is considered to be one of the Seven Sages of Greece.

Solon render
Add a photo to this gallery 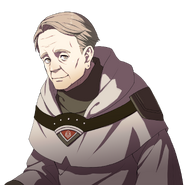