Not to be confused with Sonya, a character from Gaiden and its remake

Larissa Gallagher
[view]
“Not a familiar face to be seen, is there? These are all Lord Nergal's puppets, his morphs!”
—Sonia

A dark sage who pledges allegiance to Nergal, around 13 years prior to The Blazing Blade, she disguised herself as a beggar woman to infiltrate herself in the manse where Nino's original family lived, playing on their sympathies to make them lower their defenses. She then captured baby Nino and her older brother to force their parents to reveal their secret knowledge about the Dragons and techniques, then killed the two mages and the little boy. When she was about to kill Nino too, Nergal stopped her and said that she had strong magical energy, so it would be better to raise her into the group. And so Nino was spared, but spent years being neglected by Sonia, to the point that she was completely illiterate and barely knew about life or anything else aside of trying to please her abusive adoptive mother, whom she thinks of as her biological one. Later, again under Nergal's orders, she infiltrated the Black Fang by seducing its leader Brendan with her beauty, making him her slave and reducing the Black Fang to nothing more than pawns for the sake of Nergal’s ambitions. Though Brendan’s sons as well as senior Black Fang members suspected her manipulation, they were unable to act by them.

In Chapter 26x, she kills Brendan Reed and harvests his quintessence, revealing her backstory to Nino and Jaffar when they confront her. After she is beaten and the group leaves, Limstella comes and takes the quintessence, leaving Sonia to die of her wounds. If Chapter 26x is skipped, after learning that she was wounded in the process of killing Brendan Reed, Nergal sneers at Sonia and executes her.

Though she is a morph, Sonia fancies herself a human and holds her fellow morphs in contempt, calling them "waste" and "human refuse" while ironically considering Limstella a "puppet" on numerous occasions. Completely reliant and devoted to Nergal, she only seeks his approval, not having a shred of affection for Nino and only raising her because she was told by him to do so.

Having deluded herself into believing she was selected, she thinks of herself as a "perfect being" and says that Nergal also said as much, which might indicate that she was Nergal's favorite morph before Limstella was created. It even leads to those who idolize her, such as Ursula, to be seen by her as useless.

Inhuman Beauty
A mysterious woman who seduced the leader of the Black Fang. Her true loyalty lies with Nergal, at whose instruction she secretly manipulates events. Appears in Fire Emblem: The Blazing Blade.

Sonia is illustrated in the trading card game Fire Emblem Cipher with the following cards: 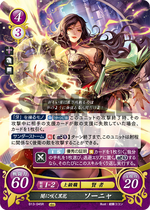 The name 'Sonia' comes from the name 'Sophia,' which means 'wisdom' in Greek. Saint Sophia was a legendary saint who was martyred in Rome. People prayed to her to keep frosts away, earning her the epithet 'Cold Sophia.'