Tara Sands
[view]
“I lived in a priory when I was a child, you know. Wearing the same drab habit… Praying day after day after day… Well. no thank you. I’m done with all that. If beautiful women don’t celebrate their beauty, the entire human race loses out. Don’t you agree?”
—Sonya

As a child, she lived in a monastery peacefully with her older sisters Marla and Hestia, as they were abandoned by their father Jedah at a priory when they were young. Although they found their new home constricting, the three got along well and helped each other get by. However, at some point in time, Jedah offered Sonya's sisters as live sacrifices to Duma in exchange for his trust. Escaping such fate with her sisters’ help, Sonya decided upon revenge and waited on her chance.

Later on, Sonya serves as a subordinate of Grieth alongside Deen, who keeps her in check and vice versa. Although she is aware of Grieth's cruelty, and hates him, she stands in Celica’s path, preventing her from crossing the desert. If Celica defeats Deen, Sonya retreats into Grieth's Citadel. After Grieth's death, she joins Celica's army, revealing that she thought that Grieth would get his just rewards eventually. Alternatively though, if she is battled instead of Deen, Sonya will die and Deen will join Celica's party.

Apparently burdened with an awful past that she hates to talk about, Sonya gives off a cool and unyielding personality and oozes womanly charm. However, internally, the feelings of hatred she hides are violent and tumultuous, and at the time when she faced off with Jedah, she fought against him as though venting her anger and fury.

In Shadows of Valentia, Sonya can develop a friendship with Genny where they bond over being left at a priory as children by their parents, and Sonya reminding Genny of her mother.

Sonya is the best Mage unit that can be recruited in Celica's route, and arguably the best Mage in the game. She starts with very strong stats for a level 5 Mage, and her overall growth is the highest of any Mage other than Celica. Her stats are split perfectly evenly, making it unlikely that she will have lopsided stats like Mae or Boey who are more oriented towards hard hitting single casts. Part of the reason Sonya is so good is that she has far and away the highest Speed of any Mage in the game, starting at 12, which most Mages likely will not reach even if fully leveled. She will end up above average for all stats when compared to other Mages, though her Luck and Defense are unimpressive in general.

Sonya also comes with one of the best spell sets in the game, losing out only to Celica. She has Angel for fighting monsters. She has Sagittae for raw damage (though the spell's Weight will likely ruin her chance to Double Attack), She has Excalibur, which has low Weight and allows her to utilize her high speed, as well as an innate 20% Critical rate to compound with her already high Skill/Critical rate. Lastly, she has Thunder which allows her a range of 3. Her spell list is versatile and nearly perfect, though she lacks Ragnarok and instead has Sagittae, which is what makes Celica's spell set slightly better. Also, upon Promotion to Priestess, she is given the ability to wield Swords, allowing her to become a formidable (if vulnerable) physical fighter on top of being a fearsome Mage.

One of the only downsides that Sonya has is that you must choose between her or Deen. While Sonya is the best unit of her class and Deen is the worst among all Mercenary units, Deen does come with a far more potent item in the Brave Sword (which in Gaiden acts more like a Killing Edge), while Sonya comes with a more generic Steel Shield. Sonya does have more versatility than Deen, but Deen edges her out in offensive potential. Sonya's Promotion allows her to double as a healer, while Deen Promotes to Dread Fighter, arguably the best class in the game. Ultimately, they are both quite good units.

* DLC class; access with the Altar of the Sorceress.

Sonya remains a strong mage like she was in Gaiden. However, the choice between her and Deen is less clear than in Gaiden. His improvements makes him a viable option, even though he would be the fourth Myrmidon unit in Celica's army. Sonya, on the other hand, is not as overly powerful when compared to Mae and Boey, especially the former. Her base level is also low, placing her further from promotion and preventing her from acquiring swords or learning Recover or Rewarp quickly.

Sonya received buffs to her stat growths, tending to favor Skill above all else, but still having a solid Attack stat and decent HP and Def growth. Due to her solid growths, she can become a high crit unit, especially if she uses Excalibur. Sonya loses the ability to use Seraphim in her base, making her weaker when fighting Terrors unlike Mae and Celica. Instead, she gains Rewarp, allowing her to teleport herself to safety near an ally, and Entrap, pulling a wayward enemy near her.

Sonya on a surface level is a powerful Green Infantry mage who unfortunately pales in comparison to Nino. While Sonya is locked to 5 Stars, Nino is acquirable at 4 Stars, making her far more accessible. They both share the same Atk, but Nino is faster, meaning she is likely to double attack, while Sonya is magically bulkier. However, the two have different offensive styles which sets the two apart. Nino is a quintessential Bladetome mage who requires buffs to reach her potential strength while Sonya is a self-sufficient nuking unit that is not entirely dependent on her teammates, though she does appreciate them nonetheless.

Sonya holds the Dark Excalibur which grants 10 additional true damage to her attack when her Special Activates. While powerful, it still takes time to charge unless she has her refine on the tome, which grants her a -2 cooldown to her special on Turn 1, essentially having her Special ready to go for her first attack. With proper buffs and support, Sonya can unleash powerful attacks on her first turn, but she desires certain premium skills to dominate her foes. In fact, Sonya is greatly held back by skill inheritance and will require heavy investment to bring her to the top tiers of green mages.

Her kit nonetheless still gives her a platform to start from with Moonbow which ignores 30% of her enemy's Res when it activates, which helps against magically bulky foes. With a two turn cooldown, it is available for immediate usage on Turn 1. Mirror Strike increases her Atk/Res by 4 when initiating combat, which is a decent boost to both, the latter being useful for battles against other mages. Resistance Ploy reduces the Res of any enemy in her four cardinal directions by 5, increasing her damage. At 35 neutral Res, she is able to inflict this over a handful of units, but not over an equally decent chunk of heroes.

Sonya's physical bulk is near non-existent and she will be felled by any who are able to get to her in a close quarter assault. High Res reds packing Distant Counter like Altina or Res bulky ranged units like Felicia, Flora, and Niles can take a hit even with the Moonbow effect and retaliate with likely a single retaliatory hit.. Her ideal build is highly self-sufficient, but hitting her with debuffs will greatly reduce her power

As a Mage, Draw Back or Reposition are wonderful unit positioning skill and one should be chosen on player's preference.

Sonya's main power comes from constantly having her Special charged and ready to go and ideally wants to kill her opponent in one hit, thus Special Spiral is an essential skill to keep this going as its two charge reduction upon activating a Special keeps it immediately ready for the next battle. Moonbow is an effective Special skill, but Glimmer also is a worthy contender as well and ultimately comes to player preference. Death Blow and its emphasis on raw Atk boosting is also great for ensuring he gets a singular, powerful hit that is guaranteed to defeat her opponent. Life and Death is a worthy alternative as a hit to her Def hardly changes its impact on her overall and as a one-shot unit, the Res is also rendered moot since she ideally should not take a hit in the first place. Odd Attack Wave or Even Speed Wave gives her the self sufficiency to give herself a visible Atk buff, though she will be significantly stronger one turn over another.

Dazzling Rabbits
Bewitching bunnies that have journeyed to Askr for the spring festival to steal the gazes and hearts of all. They appear in Fire Emblem Echoes: Shadows of Valentia/Awakening.

Sonya's search for a cure for women turned into witches took her across the land. Her trail ended in a remote region, after which she was never seen again. Rumors fly, however, that shortly thereafter a new witch took up residence in Nuibaba's abode on Fear Mountain.

Sonya is illustrated in the trading card game Fire Emblem Cipher with the following cards: 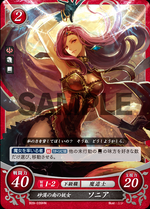 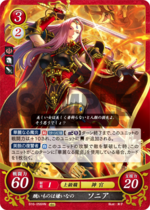 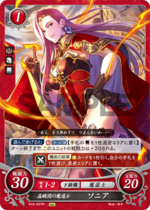