Tara Sands
[view]
“I lived in a priory when I was a child, you know. Wearing the same drab habit… Praying day after day after day… Well. no thank you. I’m done with all that. If beautiful women don’t celebrate their beauty, the entire human race loses out. Don’t you agree?”
—Sonya

Sonya is a playable character from Fire Emblem Gaiden and its remake, Fire Emblem Echoes: Shadows of Valentia. She is 25 years old in Echoes.

As a child, she lived in a monastery peacefully with her older sisters Marla and Hestia, as they were abandoned by their father Jedah at a priory when they were young. Although they found their new home constricting, the three got along well and helped each other get by. However, at some point in time, Jedah offered Sonya's sisters as live sacrifices to Duma in exchange for his trust. Escaping such fate with her sisters’ help, Sonya decided upon revenge and waited on her chance.

Later on, Sonya serves as a subordinate of Grieth alongside Deen, who keeps her in check and vice versa. Although she is aware of Grieth's cruelty, and hates him, she stands in Celica’s path, preventing her from crossing the desert. If Celica defeats Deen, Sonya retreats into Grieth's Citadel. After Grieth's death, she joins Celica's army, revealing that she thought that Grieth would get his just rewards eventually. Alternatively though, if she is battled instead of Deen, Sonya will die and Deen will join Celica's party.

Apparently burdened with an awful past that hates to talk about it, Sonya gives off a cool and unyielding personality and oozes womanly charm. However, internally, the feelings of hatred she hides are violent and tumultuous, and at the time when she faced off with Jedah, she fought against him as though venting her anger and fury.

In Echoes, Sonya can develop a friendship with Genny where they bond over being left at a priory as children by their parents, and Sonya reminding Genny of her mother.

Sonya is the best Mage unit that can be recruited in Celica's route, and arguably the best Mage in the game. She starts with very strong stats for a level 5 Mage, and her overall growth is the highest of any Mage other than Celica. Her stats are split perfectly evenly, making it unlikely that she will have lopsided stats like Mae or Boey who are more oriented towards hard hitting single casts. Part of the reason Sonya is so good is that she has far and away the highest Speed of any Mage in the game, starting at 12, which most Mages likely will not reach even if fully leveled. She will end up above average for all stats when compared to other Mages, though her Luck and Defense are unimpressive in general.

Sonya also comes with one of the best spell sets in the game, losing out only to Celica. She has Angel for fighting monsters. She has Sagittae for raw damage (though the spell's Weight will likely ruin her chance to Double Attack), She has Excalibur, which has low Weight and allows her to utilize her high speed, as well as an innate 20% Critical rate to compound with her already high Skill/Critical rate. Lastly, she has Thunder which allows her a range of 3. Her spell list is versatile and nearly perfect, though she lacks Ragnarok and instead has Sagittae, which is what makes Celica's spell set slightly better. Also, upon Promotion to Priestess, she is given the ability to wield Swords, allowing her to become a formidable (if vulnerable) physical fighter on top of being a fearsome Mage.

One of the only downsides that Sonya has is that you must choose between her or Deen. While Sonya is the best unit of her class and Deen is the worst among all Mercenary units, Deen does come with a far more potent item in the Brave Sword (which in Gaiden acts more like a Killing Edge), while Sonya comes with a more generic Steel Shield. Sonya does have more versatility than Deen, but Deen edges her out in offensive potential. Sonya's Promotion allows her to double as a healer, while Deen Promotes to Dread Fighter, arguably the best class in the game. Ultimately, they are both quite good units.

While Sonya for the most part has the same role as she did in the original, her competition, Deen, has greatly improved, as have the mages obtained earlier, Mae and Boey making the decision between the two much more difficult. Even without having access to Sagittae and Seraphim in Echoes, Sonya still has a wide variety of spells that she can use and is still a solid mage, but may be redundant if the former two have developed well and if the player does not care for supporting spells, however not having Seraphiam does remove some of the utility she once had when fighting monsters

Dread Fighters in Echoes are borderline broken with their high movement, speed and class skills, while Priestesses and Sages are less than stellar towards endgame because they, alongside Barons, move the slowest and units gain more resistance. However, thanks to Sonya's support spells, her issues are mostly remedied. With Rewarp, she does not have to worry about her low movement unlike the aforementioned two mages. With Entrap, she can bring a particularly dangerous enemy unit to the team, so everyone including the units with low movement can attack the unit at once to quickly rid of the threat.

In the end, both she and Deen are good additions to the team, but the development of Celica's party should decide which is the superior option.

"Sonya's search for a cure for women turned into witches took her across the land. Her trail ended in a remote region, after which she was never seen again. Rumors fly, however, that shortly thereafter a new witch took up residence in Nuibaba's abode on Fear Mountain."

Sonya's artwork in The Complete. 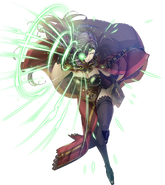 Artwork of Sonya in Fire Emblem 0 (Cipher) by Niji.

Sonya, as she appears in the Fire Emblem Gaiden manga.

Sonya as a Mage in Fire Emblem 0 (Cipher).

Sonya's battle model as a Mage in Echoes: Shadows of Valentia.