The Soothing Sword (いやされる剣 Iyasareru ken, lit. Healing Sword) is a special Sword that hails exclusively from Fire Emblem Awakening. Like its name suggests, this sword restores the HP of its wielder by 10 points at the onset of each new turn. It must be equipped for the restoration to occur.

While its healing effect would be beneficial for units fighting in the thick of battle, its Durability of 10 makes its benefits short-lived, especially if the wielder is being repeatedly attacked and is counterattacking. 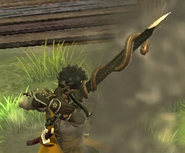