Sophia makes a brief cameo, where she is looking for Athos and can have conversations with different members of Eliwood's army if the player visits the ruin village at the bottom right of the map. She also apparently knows Hawkeye, accidentally mistaking him for the Archsage like everyone else when he send Hawkeye to the ruins. Hawkeye asks her to tell his daughter that he will be home and she says she will.

Sophia was captured by Bern forces and sent to the same prison cell as Cecilia, where she treated the general's wounds using her powers. Aside from that, she can see the future, though not clearly. She then leads the Alliance army to Arcadia, in order to help the people there shake off Bern's invasion.

Though she has little background, in support conversations she speaks slowly, demonstrating her shyness. It is noted that she is very old, about one century of age. Sophia cannot transform into a dragon, even though she is half-human half-dragon, as she does not seem to possess a dragonstone.

She can form a close friendship with Raigh and can marry Roy if they have A-support in the end.

Description: A shaman from Nabata who can predict the future.

Sophia is the second Shaman the game provides, and in a very unfortunate position: she is a level 1 unit, arriving in the thirteenth chapter. By this point, promoted enemies are becoming increasingly common, powerful prepromotes are joining the army, and the rest of the player's army will likely be around level 15, if not promoting themselves. In this environment, the vast majority of enemies can kill Sophia in one round - if not one hit. Because of these factors, training up Sophia will be a massive chore.

With evasive enemies, a pitiful 2 Skill, and mediocre base accuracy on her tome, Sophia's accuracy is atrocious. She will routinely face hit rates below 50%, though she can at least take a small chunk off most enemies due to hitting Resistance. With 2 Speed while wielding Flux, any attack aimed at Sophia will likely hit her dead-on, and 3 Luck means that it may even crit - though considering Sophia's durability, this is mostly adding insult to injury. In a small mercy, due to her having normal movement and ranged attacks while many enemies are bogged down by desert terrain, Sophia's joining chapter is likely one of the better places to attempt training her (though the player must beware of enemies lurking in fog of war). This is also where Sophia can make her biggest contribution, uncovering a Guiding Ring in the sand.

When raised fully, Sophia's stats become very lopsided, focusing heavily on Magic and Resistance with every other stat trending towards mediocre at best. She is quite durable magically after promotion and hits very hard, which, when combined with her weapon triangle advantages, tends to let her take on enemy Mages and Sages fairly well. However, her doubling issues, poor physical durability, and risk of crit chance will likely hound her to the endgame.

Overall, Sophia is often regarded as one of the least useful units in the series, and tends to tie with Gwendolyn for the title in The Binding Blade. She will need significant favoritism and extremely cautious play to catch up, and is not particularly strong upon being fully leveled. She should generally only be used if the player seeks to challenge themselves.

Nabata Prophet
A shaman of Nabata who has lived a sheltered life away from other people. Sees the future. Appears in Fire Emblem: The Binding Blade.

Sophia began as an unassuming mage with a modest Atk and good bulk for a mage, but incredibly slow. She was often compared to Winter Tharja, but without the access to Armor buffs, making her an inferior option for the prevalent Armor meta of Arena scoring. Her lacking focus in her starting kit and status as an early Heroes unit severely hinders her initial performance without a lot of external inheritances. However, what is made clear is that Sophia is geared towards a defensive mage as her later received personal tome cements this role.
Her initial Fenrir tome simply has high Mt but no effects. This changed when she received the Eternal Tome through a later update plus a Weapon Refine. Eternal Tome not only has a Raventome effect, forcing colorless units into a color disadvantage, but it also is a point stronger than Fenrir. She becomes a strong counter to the colorless meta as she severely weakens their damage. When refined, it gains a Bracing Stance 2 effect, boosting both her defensive stats by 4 when attacked, bringing her Defense and Resistance to a respectable 32/33 respectively, further pushing her bulk to stave off green and colorless units.
Dragon Fang is a slow charging special that packs a decent punch when it activates, but Sophia’s Attack stack is not exactly the highest. Warding Blow increases her Res by 6 when initiating, boosting her resilience to mages. Fortify Resistance boosts the Res of any ally adjacent to her at the start of her turn by 4.
Sophia was one of the initial Heroes to later receive a Resplendent form, blessing her with a base +2 to her core stats, improving her performance overall, though mainly boosting her overall bulk and a little more to her damage.

Her low speed means that her biggest counters are Heroes whom she cannot eliminate in a single hit. Magically bulky units can withstand her single hit and retaliate such as Nowi, Fjorm, and Micaiah. Fast Blue Mages in general, such as Linde, Ophelia, and Ishtar can also easily double her and work through her good Res. Reinhardt and Dire Thunder Olwen similarly throw their double attacks into her uncontested. A majority of the Quad-Attack Meta units such as Elincia, Est, and Cordelia easily unleash their four attacks. This will also include Setsuna, Bridal Cordelia, and Brave Lyn if she is not running her Eternal Tome set.

Sophia can run either Reposition or Draw Back for standard mage Support Skill options, both of which has applications in different situations so player preference determines which one is desired. She has decent enough Res even in her non-resplendent form to run Ploys, though she still has a decent number of enemies who can avoid this. Smoke skills are also great on her as Atk Smoke reduces her enemy's Atk stat, making her a harder wall to damage while Res Smoke increases her own damage. She can effectively run any Special skill as her bulk is high enough to use either Bonfire or Iceberg, though it depends on her Asset. Sol is a wonderful choice for her longevity as a tank as she can easily recover the small ticks of damage she may receive while walling off her opponents.

Building around her Eternal Tome and going full defensive is her best route overall. Close Counter allows her to counter all potential offensive enemies who attempt to attack her. On a budget, Bracing Stance effectively doubles her refine's effects, giving her +8 to her Def/Res. Sturdy Stance, Warding Stance, or Mirror Stance boosts her Def, Res, or Atk/Res respectively and employs a Guard effect, slowing enemy specials. Depending on her Skill A, she can employ Guard itself if she is not using the latter three skills. Otherwise Null C-Disrupt can stop her Distant Counter opponents from countering her in the rare times she does initiate combat. Quick Riposte can also work, though this is best left off as her Seal than anything. Skill C is flexible enough for her to run Wave skills and Smoke skills in particular.

Cobweb Prophet
A half-dragon priestess from Nabata. She has come to the harvest festival accompanied by her spider friend. Appears in Fire Emblem: The Binding Blade..

Sophia - Nabata Prophet (ナバタの予言者 Nabata no yogensha)
"After returning to Nabata, Sophia disappeared. There are no records to what happened to Nabata after the war, so no one knows how Sophia led her life from then on…"

Sophia and Roy
"Sophia accompanied Roy to Pherae, where they married. Although she was never very talkative, her wise decisions played a major role in the reconstruction of Lycia."

Sophia is illustrated in the trading card game with the following cards: 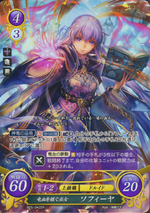 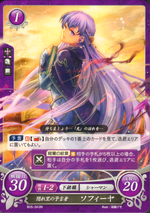 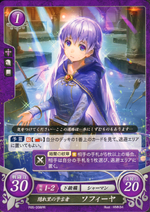 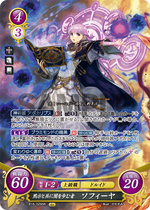 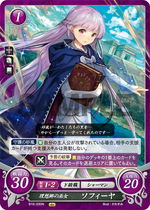 Sophia is Greek for "wisdom". This was the name of an early saint who supposedly died of grief after her three daughters were martyred. Sophia also appears in the phrase Hagia Sophia (which means "Holy Wisdom"), which is the name of a large basilica in Constantinople. Her name in the Japanese version, Sofiya (София in Russian and Bulgarian, Софія in Ukrainian), is a Slavic variant of Sophia.