Stephanie Sheh
[view]
“It's my fault... Argh! I'll never be a real knight if I can't control my horse!”
—Sophie in a support conversation with the male Corrin

Sophie is a playable character in Fire Emblem Fates.

Sophie is the daughter of Silas. She has learned how to fight on horseback from Silas, and her personal horse, Avel (アヴェル), was chosen and named by Silas. A fledgling knight, she has yet to tame Avel as he tends to run wild and against her commands.

In her Paralogue, Sophie is once again trying to practice riding Avel, but he continues to be stubborn with her, bucking her off and running away towards the portal out of her Deeprealm world. Giving chase, Sophie winds up back in the normal world and manages to regain control of Avel. Just as she was about to return back to her Deeprealm, she catches local bandits harassing a village boy. Wanting to help the boy out, as well as hopefully impressing her father, Sophie leaps into action, but Avel proves to be troublesome once more. As luck would have it, Silas and the army he was traveling with happened to be in the area to stop that same bandit gang. After meeting her father on the battlefield, Sophie plays off that her presence is merely because she heard the shouts of help through the portal to her Deeprealm. At the end of the battle, Sophie was surprised that Avel followed her directions in battle, which Silas attributed to her more confident attitude. Silas reveals that he chose Avel for her horse because of his more demanding attitude, hoping that he would teach her to become a confident leader in the future. Proud to see how much his daughter has grown, Silas invites Sophie to come live with the army, an offer she gladly accepts.

Sophie is prone to making mistakes, mostly unintentionally but maintains an optimistic, cheerful demeanor. She is determined to prevent further mistakes, but may take them to extremes which often tend to fail dramatically. She dreams of being a respectable knight like her father and loves that she can compete with him in his prime.

Avel does not quite take to Sophie, often running wild, bucking her off, and even biting her. Sophie is able to rein him in only in the heat of battle, particularly when she is focused on the fight. Otherwise, Avel causes pandemonium that Sophie apologetically has to address. Despite the destruction and mayhem left in his wake, Sophie adores Avel and is determined to become a true master for him.

Aside from her relationship with Avel, she's very fond of horses in general. Her supports with Forrest reveal that she likes clothing with silhouettes of horses on it, or fabric that's the same color as Avel's coat. She enjoys stretching and excercizing regularly, and is noted to be extremely limber by Shiro, being able to lift her leg over her head.

She talks to herself more than anyone.

*Sophie will receive whatever secondary class that Corrin has access to if she has achieved an S-Support with him.

Inheriting her Father's base stats, she has an inclination towards Strength and Skill based classes. Regardless of her mother, she will hold onto these positive traits. Her personal skill, Mischievous, further emphasizes her affinity for physical classes since it forces all enemies that she initiates upon to lose 3 points of Defense. On a side note, if she attacks with a weapon advantage, she strips her enemy as a visual bonus. Sophie starts out as a Cavalier with Elbow Room and Shelter giving her a damage boost and utility, respectively, although the latter skill will probably fall off in later stages.

Sophie can promote to either Paladin or Great Knight. Paladin helps her naturally good Speed and Skill growths, and makes her a good all-around physical unit. Defender is somewhat useful early game, although like Shelter it will fall off later. Aegis is a useful skill to shave off magic damage, and Sophie will trigger it often due to her high Skill. Great Knight trades Paladin's Speed and Resistance for Strength and Defense. It offers 2 extremely useful skills in Luna and Armored Blow; the former can help Sophie take down bulkier enemies, while the latter makes her hard to take down physically on her turn. Overall, both classes are good options for Sophie, and it largely comes down to player choice which one they prefer.

Like her father, Sophie has access to Mercenary, and its promotions Hero and Bow Knight. While she loses mobility as a Mercenary or Hero, she will also lose her Beast weakness. Her growths and good Sword rank mean she can jump into this line with little trouble. Mercenary offers Good Fortune and Strong Riposte, neither of which are too useful to her. Hero offers Sol, a very useful recovery skill which Sophie should activate often due to her high Skill. Axebreaker can be useful to take down Axe wielders, but since all of Sophie's final classes use Swords they shouldn't present too much of a challenge. Bow Knight lets Sophie regain her mobility, and offers a range option in Bows although she will have to start at E Rank. Rally Skill is not especially useful to her, as she would rather be attacking than supporting. Shurikenbreaker is a superb skill for her, especially on Chapter 25 in the Conquest route. Overall, Sophie is a strong and versatile unit who should be a welcome addition to your army, especially in Birthright.

Silas does not have any friendship class that she cannot get in some form from a potential mother as she can get Ninja from Kagero, Troubadour from Felicia, and Samurai from Hana. Choosing a skill to pass down to her is up to the player, though if searching for a skill that is useful from these classes without forcing her to have one of them as her mother, it is completely up to the player.

Sophie is illustrated in the trading card game Fire Emblem Cipher with the following cards: 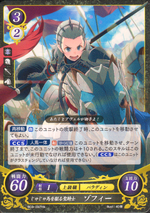 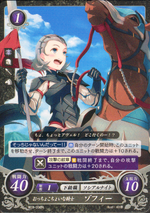 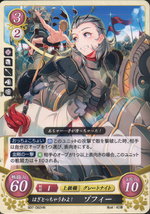