[view]
“Things like saving the world and fighting goddesses are just beyond me. They're out of my reach. That's why I've always chosen to fight for the smaller things in life and the people close to me. If that means I have to fight you to protect them, then so be it.”
—Sothe talking to Dheginsea before battle.

Sothe appears as a Trophy and a Sticker in Super Smash Bros. Brawl.

Sothe first met Micaiah when he was a young child, and the two eventually formed a close bond, treating each other as brother and sister. During Path of Radiance, Sothe first appeared as an orphaned stowaway seeking a lost, unnamed companion; in Radiant Dawn, it is revealed that this companion was Micaiah, who fled Daein to prevent him from being affected by her identity as a Branded.

Sothe was the first character of the Path of Radiance cast that was announced to return in Radiant Dawn. After The Mad King's War, Sothe returned to Daein's capital of Nevassa, found Micaiah, and expressed how upset he was that she had abandoned him. As a result, Micaiah realized how important she was to him, and she swore to never leave him again.

However, Sothe and Micaiah continue to have their disagreements. Throughout most of the game he argues with her, mainly over Sothe's strong respect for Ike, whom Micaiah views as responsible for destroying Daein in The Mad King's War. Nevertheless, he is very protective of her, and he stays by her side during their battles against Ike. He promotes to Whisper in the fourth section of the game after receiving a blessing from the goddess Yune. If he and Micaiah have an "A" level support rank at the end of the game, they wed and he becomes her pillar of strength as they work tirelessly to help the poor.

Sothe shares a protective, close, and brother-sister type friendship with Micaiah. Due to his childhood life with Micaiah he has an unshakable faith in her, even to the point he can be a bit of "Micaiah's boss", though that could be due to her leading the army or due to their childhood friendship because she looked after him when he was little.

He has a bit of a rivalry with the Black Knight, who has come to protect Micaiah, much to Sothe's annoyance. Much to the annoyance of Micaiah, he also gained a slightly more-than-healthy admiration for Ike from serving under him in The Mad King's War, aggravating Micaiah to such a point that she refers to Ike as the "father of Sothe's children." Sothe's overall personality is very calm. According to an Info Conversation with Micaiah, it seems that Sothe does not smile much.

In Path of Radiance, Sothe not only joins after Volke, but also joins with weaker base stats (particularly concerning his bulk) which while not too impactful to a thief, still raises more problems should he be attacked while stealing or picking locks (Volke cost 50 gold per lock but this isn't too impactful as gold in this game is an abundance). While it can be tempting to utilize BEXP and the Blossom Skill to increase stats greatly, it's not useful as he still is just a thief who is stuck with knives and cannot promote. In all, just like Volke, he should just stick to stealing items and picking locks.

Sothe's stats are directly carried over to Radiant Dawn, for better or for worse. On average, his stats will be worse when they get transferred, so it's not recommended to do it.

Note: Unlike the majority of returning characters from Path of Radiance, Sothe's stats (with the exception of the Build and Movement stats) carry over directly from the transferred save file if he reached Level 20.

Sothe's stats are very good early on, as he can kill most enemies that other units, like Edward and Leonardo, may succumb to. He holds an A support by default with Micaiah, so putting them close together is an advisable practice as much as possible. He is also capable of picking locks, making him a decent asset.

When Sothe becomes playable again in Part 3, his stats are not as useful as they were before, but the massive amount of enemy Laguz makes his ability to use a Beast Killer allows him to be a very useful unit. However, for the rest of the game he is plagued with a low strength cap that offsets his high Growth rate. He also has low Defense, which makes him a bit fragile. However, if Edward (or Nealuchi/Nephenee after reaching Part 4) is not being planned to be used in the Endgame, then Sothe can take his/her Wrath skill to increase his Critical rate when his HP gets too low.

In Part 4, after the Prologue, he is promoted by Yune into a Whisper due to game events. Notably, Bane, the default skill of Whispers is more trouble than it's worth as it only brings a unit to 1 HP rather than instantly kill. Not helping is the low strength/defense cap for Whispers.

Zephyr
A thief for the Dawn Brigade. He generally shows little interest in others but tends to be overprotective of his Micaiah, who's like a sister to him. Appear in Fire Emblem: Radiant Dawn.

Becoming a pillar of strength for Queen Micaiah, Sothe worked tirelessly to assist the poor and downtrodden.

(A support with Micaiah)
Becoming Queen Micaiah's husband and her pillar of strength, Sothe worked tirelessly to assist the poor.

Sothe is illustrated in the trading card game with the following cards: 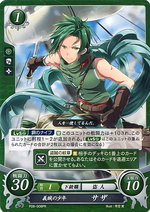 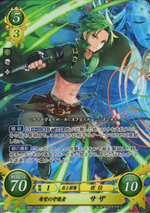 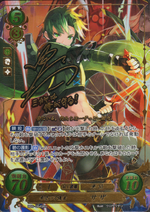 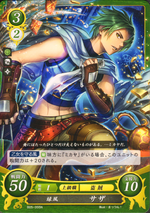 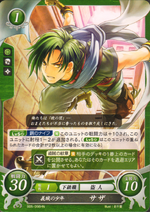 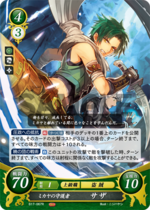 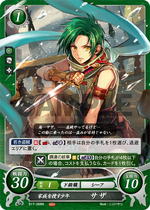 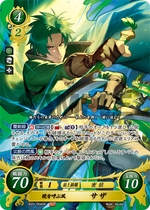 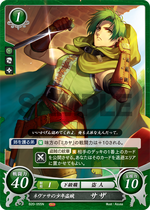 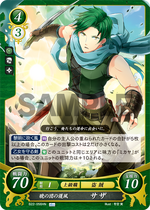 Sothe's name sounds like the word "sooth," which means "truth" in Old and Middle English. "Sothe" was a variant spelling of the word. The Japanese pronunciation of his name, Saza (サザ), means "small."